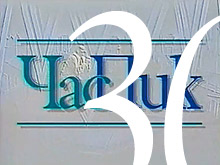 The popular analytical talk show “Chas Pik” or “Rush Hour” first appeared on Russia’s television screens on this day, May 30, 1994. Created and hosted by Vladislav Listev, one of Russia’s most respected and well-loved journalists, the show was regularly watched by almost the entire nation.

By the time “Chas Pik” aired, Listev had already become known as a key figure in bringing openness and democracy to Russian television. He was the creator and host of many other popular programs, like Vzglyad (“The View”) and “Pohle Chudes” (the Russian version of ‘Wheel of Fortune”). All his shows were major hits.

Listev was later appointed general director of the Russian Public Television channel (ORT). One of his first initiatives as director was the proposal to eliminate all advertising on the channel in order to remove all those agents participating illegally in this profitable business and to place all matters concerning advertising in the hands of the channel’s management.

On March 1, 1995, Listev opened his show “Chas Pik” with the words, “Good evening, we are live, I want to congratulate everyone with the first day of spring, and with the hope that this day brings… and as you know hope springs eternal.” When returning home from the show, Listev was shot dead on the stairs of his apartment building. All his valuables and a large amount of cash were left untouched, leading investigators to believe that his murder was connected to business and politics. But to this day no one has yet been named guilty or punished.

Listev’s death was accompanied by a massive stir among the public. The country was overwhelmed by the horror of his death. His funeral was attended by thousands and programming on major television channels was suspended for an entire day. Many assumed the program “Chas Pik” would be suspended but it remained on air until November 27, 1998.