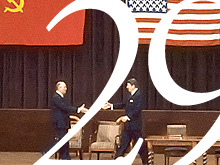 On May 29, 1988, President Reagan made his first trip to Moscow to meet with USSR leader Gorbachev and begin their fourth summit meeting. Conventional wisdom about this meeting was that it was a triumph of image over substance conveyed by both men to a carefully watching world.

Just six months earlier, during a December 1987 summit in Washington, D.C., the two leaders had signed the historic Intermediate-Range Nuclear Forces (INF) Treaty, which eliminated an entire class of nuclear weapons from Europe. In many ways, Reagan's May trip to Moscow was celebratory. The summit produced no major announcements or breakthroughs. However, it indicated that, despite serious differences, the two leaders managed to establish a relationship closer than any US president and Soviet leader had ever been in for years.

The summit was as important for Gorbachev as it was for Reagan. Gorbachev had to demonstrate to his people that the Soviet Union had entered a new era of peaceful coexistence with the United States, and that the USSR had nothing to fear from an American president, once a bellicose opponent, fixed on the destruction of Communism. Reagan’s firm standpoint on human rights and their violation in the Soviet Union brought the issue to the spotlight of the American-Soviet relations in the future. His efforts toward thawing the Cold War also received a nod from America's allies, who thought Reagan’s past actions had significantly aggravated the already threatening situation.

The summit had been on the rocks from the start, embittered by Reagan’s attempts to lecture Gorbachev about the need to improve the Soviet Union's human rights record. He urged the Communist leader to ease restrictions on freedom of religion and to relax the laws that kept many Russian Jews from emigrating. Reagan also met with almost a hundred soviet dissidents and assured them the entire world prayed for their wellbeing. The Soviets were very annoyed by Reagan meddling in purely internal affairs, which was communicated to reporters by the Soviet Foreign Ministry spokesman, “We don't like it when someone from outside is teaching us how to live, and this is only natural.” From such a toilsome start, the summit went straight downhill and ended with no further progress on arms control. However, while in Moscow, Reagan finalized seven agreements with Gorbachev on student exchanges and fishing rights.

As the recently declassified papers reveal, the American leader made several attempts to awaken spirituality in Gorbachev to put to test his strongest belief of the religious freedom being the best catalyst for liberal reforms. Reagan was misled by Gorbachev constantly saying “Thank God” – an expression easily spoken in Russian by every rigid atheist – and thought that deep inside Gorbachev was a religious man.

Turning away from the gnawing political uncertainty Reagan got an eyeful of Moscow. He spoke before a group of students and Russian intellectuals at Moscow State University, attended the Bolshoi Ballet, and visited the Danilov monastery, while First Lady Nancy Reagan toured Leningrad. Walking along Red Square, the “Great Communicator” (as Reagan was known in the United States) disarmed the soviet people with his brilliant humor and won universal admiration talking to people and shaking hands. His easygoing style and image made him a hit with the local audience and vice versa. In his recently disclosed diaries, Reagan noted that people on Moscow streets were exceptionally friendly and happy, that Red Square was majestic, and his walks – enjoyable. When confronted by reporters about why he was visiting the “Evil Empire” (as he had once put it), Reagan's sharp response was: “I was talking about another empire.”