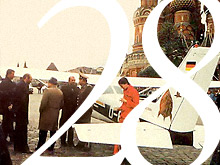 On May 28, 1987, a nineteen-year-old pilot enthusiast from Germany Matthias Rust crossed Soviet territory unlawfully and unchallenged and landed his small “Cessna-172” airplane in the heart of the USSR – Red Square in Moscow.

Miraculously, Rust’s plane was not shot down when he crossed the Soviet border, considering that just a year before the Soviet air defense brought down a South Korean plane with nearly 300 passengers onboard when it violated Soviet borders. For the USSR, Rust’s unexpected visit caused a political crackdown, as a result then-President Mikhail Gorbachev dismissed the Minister of Defense and the commander of the Soviet air force.

In spite of being the age of a student at the time of landing in Moscow, Matthias was already the owner of a West German pilot’s license and a very experienced pilot. He performed several long distance flights to the Shetlands and Faeroe Islands in zero visibility conditions, when one has to rely only on the instruments.

On May 28, according to the records of the Finnish aerodrome, the young Rust lay ahead a straightforward flight plan from Helsinki to Stockholm. The only thing that could have caused the technicians on duty to be suspicious was that not only did Rust have a full tank of fuel in the Cessna-172 – when a half tank of fuel is more than sufficient for the flight – but that he also brought several more fuel canisters into the plane as well. It was as if he wasn’t flying to the neighbouring country, but to a different continent altogether.

However, the German had distracted the dispatcher on duty, bribing him with whiskey, and so he wished the young German and his Cessna good luck with the flight. For twenty minutes the pilot was in communication with the Finnish dispatcher. Then, having informed the officials that he had everything in order, he discontinued communication and abruptly changed course by 180 degrees. Shortly afterwards the Cessna disappeared off the radars. The Finns raised the alarm: firstly because Rust changed course to the direction of Moscow extremely quickly and could present a danger to other aircraft.

It was not long before he was met by a Soviet MiG fighter jet. Rust described his feelings at that point “I was very scared, very shocked; it was like my heart fell down in my pants. I was asking myself what was going to happen next, what are they going to do, are they going to stop me now, shoot at me? It was awful and such a relief when I noticed that after two, three minutes they disappeared.” Luckily for Rust they were not given instructions to destroy the small Cessna plane he was piloting, and by the time the pilot had been given the order to investigate, Rust had already disappeared into the clouds.

Upon reaching Moscow, Rust could not land straight onto Red Square, as it was full of people and he was afraid to injure somebody. Instead he managed to land his Cessna on the Bolshoy Moskvoretsky Bridge leading up to it and taxied his plane towards Saint Basil’s Cathedral.

After the landing, Rust was arrested and put on trial. He told the court that his dangerous adventure was an act of peace: “Piloting the small Cessna I decided to achieve my dream: to fly from the West straight onto Red Square. As a gesture of peace: a flight as a symbolic bridge between the two worlds.” He was sentenced to four years in jail but only served 14 months and was sent back to Germany.

Many anecdotes sprang up after this incident; for a while people called the Red Square “Sheremetyevo-3” (Sheremetyevo-2 was the only international airport in Moscow at the time) , and jokingly said that a police post was stationed next to the fountain beside the Bolshoi Theater, just in case an American submarine emerged.

Today Rust looks back at his international misdemeanor philosophically and with mixed emotions:

“I think I’m in between. One day I’m telling myself I shouldn’t have done it, because otherwise I would have had a much easier life. But as I said before and always think that, without that experience, without fulfilling my destiny, I wouldn’t have come out like I am today.”

After returning to Germany his life became even more turbulent as he has faced the German court twice. In 1989 he stabbed a woman who did not want to go on a date with him with a knife, and in 2001 for trying to steal a cashmere sweater from a store in Hamburg. For the former he spent 15 months in jail, and for the latter incident Rust was fined $5,000. Today Rust makes a living playing professional poker and one day hopes to return to Moscow, but this time via a “regular flight”.