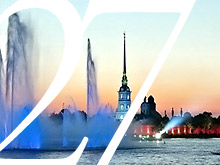 On May 27, 1703, Peter the Great lay the foundations of a new fortress, on territory recently regained from Sweden, which would then go on to become the city of St. Petersburg.

The lands along the Neva-river belonged to Ancient Russia since at least the 9th century, when the area had gone under the jurisdiction of the Principality of Novgorod, the major center of domestic and international trade and craftsmanship. In the Time of Troubles (1598-1613), Russia, weakened by the absence of a direct heir, found itself the target of a Swedish invasion. It suffered significant territorial losses, sealed by the Stolbovo Treaty of 1617, with the Swedes effectively cutting off Russia from all Baltic trade routes.

By the end of the 17th century Peter the Great was determined to regain access to the Baltic Sea and establish stronger ties with the West. To fulfill these objectives he embarked on the Northern War with Sweden in the years 1700-1721, in 1703 seizing the territories adjacent to the river Neva.

To protect the newly conquered lands on the Neva delta Peter the Great needed a fortress. He chose Hare’s Island, or “Zayachy ostrov” in Russian, as a new place to build his new and more reliable stronghold. The Peter and Paul fortress was the first structure to be built in the new city as protection from the Swedish threat. However, throughout its history, the fortress didn’t see a single fight.

On May 27, 1703, the first stones of the fortress were laid, marking the start of the construction and the official birthday of the new city. Peter himself called it Saint Peter Burgh, in the Dutch manner, relating to the Apostle Peter, the keeper of heaven’s gates. To the Tsar’s thinking, the name was symbolic: the city bearing such name was, too, the gate to the Baltic Sea and to Europe.

The walls and bastions of the fortress were completed by the end of summer 1703. The construction itself was very laborious and back-breaking. The builders worked from dawn till dusk, suffering excessive humidity, lack of decent housing and scarce food supply. By August 1703, the new settlers in Peter's city were confronted with its infamous floods. The severity of works and the fatality rate at the construction site spawned a Russian expression that “the city was built on human bones”. The data on human losses is very controversial, though: while some sources claim the number to be over 100,000, the others cite only a thousand victims. The boggy nature of the terrain made the area quite unhealthy for living, but the tremendous strategic importance outweighed any shortcomings, so Peter carried on with the construction despite losses and expenditures.

The Tsar, too, invested himself to the fullest in the construction. When a wooden cabin was built for him several days later – the first residential building of the newborn city – Peter stayed there, slept on rags, and kept the construction under his constant supervision.

St. Petersburg saw an amazing makeover in its first years from an unpopulated bog into a fine European capital. Originally the city had no bridges, and people had to be ferried between the banks by boat, which gave St. Petersburg its nickname “the Venice of the North”. Construction of the new city was headed by Peter’s closest associate and the city’s first governor Aleksandr Menshikov and the architect Domenico Trezzini from Switzerland.

In 1712 the court was fully transferred from Moscow to St. Petersburg, the official year the city on the Neva became Russia’s new capital. However, in his letter to Menshikov, Peter referred to St. Petersburg as the capital in 1704.

Unfortunately, many of Peter’s projects fell into disuse with his death in 1725. The fight for power between Peter’s successors turned their attention away from evolving the city. St. Petersburg was only fully revived as the capital when Peter’s daughter, Empress Elizabeth, was put to the throne after a palace coup in 1741. The Elizabethan St. Petersburg became a lively European capital and has prospered ever since.