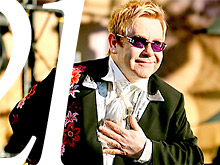 On May 21, 1979, in Leningrad, Elton John opened a series of concerts in the Soviet Union, becoming the first Western rock star ever to perform on the other side of the iron curtain.

This tour set a precedent in the music industry in the middle of the Cold War, when any Western song, rock in particular, according to the Soviet propaganda, harbored evil. None of the Western stars were allowed to put their foot on the soil of the Soviet Union; recording of their voices was impossible to purchase by any legal means in a Soviet music store, or to hear on Soviet radio – all Western stations were jammed. Authentic Western vinyls were available for big money from illicit dealers, and re-recorded secretly at homes using one’s own resources. At times, Soviet fans didn’t even know what their idols looked like.

The tickets for the concert were sold out through dealers very quickly, although the cost of the tickets went for as high as 13 roubles, while any other concert at the time would have only cost around 2.5 roubles.

The Soviet press reeked of outraged comments about the Western star’s fastidious preferences; such comments arose when Elton John revealed two palm trees he had brought all the way from Great Britain and had them installed on stage.

Shortly after the Leningrad concert, Elton John’s “A Single Man” album was officially released in the Soviet Union. This official version was re-titled to “Songs by Elton John” and didn’t have two songs in it, removed for ideological reasons.

At the concert, along with the songs from his new album “A Single Man,” Elton John performed the beloved Russian banquet song “Podmoskovnye vechera” (Evenings in the Moscow countryside), and a fragment from Tchaikovsky’s Piano Concerto #1, arranged in his singular style.

The only musician Elton John brought along was percussionist Ray Cooper. The combination of a piano and percussion was a new experience for Soviet listeners as they were only used to the piano’s classic sounds.

The audience at the show and the general atmosphere repeated what had normally been the pattern at such events. The first rows were occupied by Communist party activists with stony faces – they had better access to the tickets, but next to no interest in the performance; toward the back rows, faces softened and excitement grew.

The general equanimity, and even slight fearfulness among the Soviet listeners couldn’t elude Elton John. Later, he recalled that during the autograph sessions some people didn’t even wait long enough for their paper to be signed: they snatched blank sheets from him and left.

Regardless of some of the shortcomings, the Soviet audience was totally overwhelmed: no matter how ideologically restrained, it still was the first large-scale real-star concert. Elton John, too, seemed to have immediately formed a special bond with the Soviet Union and Russia.

After his 1979 triumph, Elton John came back to Russia in 1995 with two concerts in Moscow, and then in 2001 with a private concert in St. Petersburg, the city he had grown to love after his debut. In 2008, Elton John gave another private concert in Moscow’s upscale suburb of Barvikha. The cost of the tickets varied from $900 to $40,000, but they were immediately sold out. The concert was positioned as a charity event with all the money raised to be donated to anti-AIDS foundations.