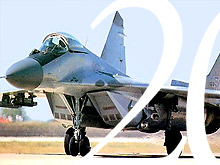 On May 20, 1989 Soviet air force captain Aleksandr Zuev escaped from an air base, hijacking the most advanced fighter jet MIG-29 and fled to Turkey. Claiming to be a political refugee, he was later given asylum in the United States.

Aleksandr Zuev was a captain on an air force base in Soviet Georgia. He was a good pilot: he had the opportunity to fly the new Mig-29, which was a dream for many pilots in those years, and was married to the daughter of the chief of staff of the air division. According to his colleagues, Zuev hated living in a “hole” and dreamed of becoming a test pilot, but was denied entry into the school because of insufficient length of service. Zuev stopped taking interest in his work and began drinking when his marriage gradually fell apart.

The day before the great escape, Zuev visited many pharmacies and bought large amounts of sleeping pills. He baked a cake adding the medicine to the recipe and before he was to start his shift announced that his wife had given birth to a baby boy and treated his colleagues to his cooking. A short time later the sleeping pills began to work. Zuev obviously had overdone it because practically everybody was sent to hospital the next morning with poisoning.

He made sure everyone was fast asleep and cut the alarm and communication cables. Zuev headed straight for the aircraft parking area, but just when he thought he was getting away, a guard on duty stopped him. Zuev pulled out a gun and shot the soldier in the leg, quickly boarded the MIG-29 and took off for Turkey.

His first words when he stepped out of the cockpit on the Turkish aerodrome were “Finally, I’m an American." The Turkish authorities arrested Zuev straight away, despite his claims that he was a political refugee, and three days later returned the plane to the Soviet Union, denying all requests from high-level US military officials to examine an advanced fighter plane.

He was put on trial, but the court believed that the traitor was a refugee and set him free. Zuev was instantly granted political asylum in the US and he was flown to Washington in June. The Pentagon signed a contract with Zuev as a consultant on Soviet aviation tactics, technology, and capabilities. Many believe that it was the information he passed on that helped the USA win Operation Desert Storm in the Gulf War.

The Soviet Union sentenced Zuev to the death penalty. But the former Soviet captain lived a quiet life in San Diego, California and eventually wrote a book titled “Fulcrum - A Top Gun Pilot's Escape from the Soviet Empire”. Zuev died in a plane crash accident on June 12, 2001, along with the famous aviator Jerry Warren, near Bellingham, Washington.