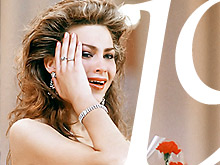 On May 19, 1989, the first all-Union beauty contest was held. Yulia Sukhanova, 17, made history as the first woman ever chosen to be Miss USSR. Sukhanova triumphed over 35 finalists from throughout the Soviet Union, winning her crown in Moscow after a two-day-long competition.

The planning committee for the contest had completed a stellar amount of preparatory activities, all of which were kept in secret. Ekaterina Maksimova, the outstanding Russian ballerina, was appointed head of the selection panel. The event had become a total craze for the Soviet people, the first one of its kind for Soviet society. The contest was not for general admittance, only personal invitations were accepted. The rest of the country was given a chance to enjoy a six-hour long live televised broadcast of the pageant.

Yulia Sukhanova started down by entering the first-ever Miss Moscow competition in 1988, though by contest rules she was a year underage. Still, even after that inconvenient fact was discovered, she was not disqualified and made it to the semifinals. After the howling success at Miss USSR she could have gone as far as the world beauty contests, but her parents adamantly refused to sign the permission.

A sensation in the Soviet Union, the event proved to the West and the United States in particular that the Soviet Union was in the middle of a critical change. "Americans imagine a Russian woman as ugly and fat and evil," Yulia Sukhanova said. To dispel such iron curtain biases from the pre-perestroika days, she went to the United States at the behest of her American counterpart, Debbie Taylor. In Sukhanova’s honor, a reception was organized in the Soviet Embassy, becoming an alluring attraction for the diplomats and creating a media frenzy, which finally got a chance to capture two beauty queens of the two super powers side by side. The footage from the reception flooded TV screens.

This is how “People” magazine described Yulia’s performance, “In the end Yulia sashayed easily through the swimsuit and evening-wear competition, and at her anointment looked every inch a Romanov princess in a black strapless sequined gown. With appropriate socialist rectitude, however, she says she doesn't like to wear her crown because it makes her uncomfortable to act ‘like a queen’. In an interview Yulia confessed, she found the pageant process ‘embarrassing’. The worst part, she said, ‘was standing in front of the cameras for ten minutes while everyone watched you, and then having to rush back and change clothes and do it all over again’.”

Coming of age, Yulia immediately relocated to the United States to pursue a modeling career. She got married and started her own sport equipment business.