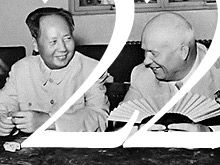 On June 22, 1960, the official break up of the Soviet-Chinese relationship took place, as Chinese leader Mao Zedong and his Soviet colleague Nikita Khrushchev exchanged demeaning nicknames, Khrushchev calling Mao Zedong a Stalinist, and blamed for being a revisionist in return.

This strain in the Soviet-Chinese relationship had started with Khrushchev’s appointment as the Soviet leader and his “destalinization” campaign, begun after the 20th Congress of the Soviets in 1956.

Furthermore, Mao strongly opposed any signs of Khrushchev rapprochement with the United States, especially in the course of the Cuban Missile Crisis, bluntly qualifying it as a slant toward capitalism, which irreparably damaged the pure socialist Soviet–Chinese relations. To Mao’s way of thinking, pursuing such policy, the Soviet Union was prone to revisionism, which posed a threat in two directions: a bourgeois invasion and surrender to imperialism. In the view of the Chinese administration, the time of the relief in Soviet-American relations was nothing but trouble for the Chinese state. Mao didn’t even reject the possibility of a third World War, as he was convinced it would only benefit the spread of the socialism worldwide.

Khrushchev informed his Chinese colleagues about nuclear bomb testing being put on hold by the summer of 1960; adding to that statement, Moscow recalled all of the Soviet specialists engaged in the construction of industrial facilities, thus suspending many of its unfinished projects. Raw material supply was stopped, together with equipment and spare parts. The Soviet Union even demanded the repayment of all of China’s loans and debts dating back to the early 1950s.

The trouble in the relationship resumed in 1963, revived by the severe criticisms of Khrushchev’s “capitulationism” appearing in the Chinese media, and finalized with a general accusatory document officially condemning the Soviet Union’s policy. In response, all Chinese diplomats were immediately expelled from the Soviet Union “for anti-Soviet propaganda”.

In talks with the Chinese leader, Khrushchev openly praised the benefits of détente relief, however, an outraged Mao denounced Khrushchev’s viewpoint in an editorial published in China on the 90th anniversary of Lenin’s birth; he condemned the Soviet Union for straying away from true Marxism-Leninism and yielding to revisionist trends, even becoming capitalist.

The tension between the two countries reached its critical point in 1969, when a borderline territorial conflict broke out on the Ussuri River, leaving 56 Soviet soldiers killed and 70 injured, while the Chinese suffered a greater deal of casualties - an estimated 800, or, in some sources, 3000 people.

Relief only followed after territorial and political negotiations between Aleksey Kosygin, Chairman of the Counsel of Ministers of the Soviet Union, and his Chinese colleague, Zhou Enlai. Though very unfruitful, they still pointed the Soviet-Chinese relations in a peaceful direction, and suggested a possibility for dialogue.