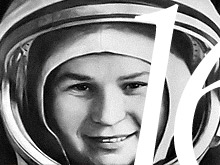 On June 16, 1963, Valentina Tereshkova of the Soviet Union became the first woman in space, spending 72 hours in Earth’s orbit on board spacecraft Vostok 6.

It was conventional wisdom in the Soviet Union that after Yury Gagarin’s premiere in space, it would be a Soviet woman’s turn to go for a spin. This being a matter of the country’s prestige, the Soviet cosmonaut chief Nikolay Kamanin and Chief Designer Sergey Korolev were looking for a female as dedicated a Communist agitator as Yury Gagarin or Gherman Titov were. From his recent visit to the United States, Nikolay Kamanin inferred that the first American woman would be put in space by the end of 1962, and, threatened that “Americans will beat us,” he requested permission to go ahead with preparation for the launching a woman in space immediately upon his return from the States.

The future lady cosmonaut had to be under 30 years of age; under 5′6″ tall; under 154 lb in weight; physically fit; ideologically pure; and at least five months of parachute experience were mandatory. Piloting skills were optional, since the Vostok spacecraft was operated automatically from the ground with the cosmonaut inside being a mere passenger.

In the end five girls were selected to complete the training course: multiple parachute jumps, isolation and centrifuge tests, and a heat chamber. Weightless flights were performed on a MiG-15 jet, with zero gravity setting in three or four times per flight, each time 40 seconds long.

Tereshkova, the least skilled of the five, became Korolev’s choice for the Vostok mission, and for good reason. Firstly, as the flight of the first woman was primarily a matter of image, she had to be ideologically reliable. While a stronger and better trained Valentina Ponomaryova openly expressed her love of simple pleasures and accepted smoking women, Tereshkova was the model Soviet: she admitted her only desire was to support the Communist Party; besides, she was a factory worker with a peasant background. Her specific charm, looks, and the right celebrity attitude finally tipped the scale in her favor and later earned her a moniker “Gagarin in a skirt”.

Secondly, Korolev planned to fly two women aboard a multiple-crew version of the Vostok, the Voskhod. For this mission Korolev needed a commander with the skills of Valentina Ponomaryova, and a spacewalker with the courage and strength of Irina Solovyova, another very qualified candidate.

After the flight there had been attempts to discredit Tereshkova: it was said during the flight she was overly emotional, tired and unable to work and complete all of her tasks. Psychologically unstable, she disregarded direct orders from the Center.

It was only in 2007 that Tereshkova finally revealed all secrets, clearing the air about all the details of her flight.

“The thing is there has been a fault in the Vostok programming: it was oriented 90 degrees from the intended direction, which meant it went in a higher orbit, so instead of a return down to Earth I was flying away ‘out there’,” she recalled. “I kept this secret for several decades, because Sergey Pavlovich Korolev asked me to.”

She did throw up in space, but she reaffirmed it was not caused by the space-sickness but the poor food she’d been given; it didn’t stop her from performing all of the assigned tasks. Ordered to remain strapped to her seat to combat her supposed space-sickness, she developed a strain in her right ankle on the second day, the pain becoming intolerable by day three. In addition, the ring of her helmet was pressing hard on her shoulder, while an itchy rash appeared under one of her biometrical censors.

On ejecting from the capsule, Tereshkova saw, horrified, that she was heading for a splashdown in a large lake. She ejected at 4.3 miles, while her parachute was only programmed to open at 2.5. “When I ejected and saw land, I was petrified,” Tereshkova went on, “There was a lake beneath. My immediate thought was: Oh my God, they put the first woman in space, and she will desecrate herself dumping into water!”

She hit her nose on her helmet, making a dark blue bruise, which made her worry about how she would look at many public appearances and in front of the authorities.

Whatever the case, Tereshkova had completed three days in space aboard Vostok 6, more than the flight time of all the American astronauts put together. To date she remains the only female general in the Russian army. Currently, she has expressed great interest in the mission to Mars.