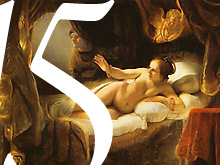 On June 15, 1985, at The State Hermitage Museum of Leningrad (now St. Petersburg) in front of a group of tourists a young man threw sulfuric acid and cut the canvas of Rembrandt’s “Danaë”. The painting, created in 1636 by the most celebrated Dutch painter, was feared lost forever.

The perpetrator was identified as a Lithuanian national named Bronius Maigis, who explained his behavior to be of a “political motive”. He was judged by the court to be insane. His attack was later named the first act of “cultural terrorism” in the history of the USSR.

The work on rescuing one of the museum’s most precious masterpieces began straight away. Immediately after the attack the painting was doused in water for an hour and a half to neutralize the acid. By evening the acid reaction had stopped, but it became apparent that thirty percent of Rembrandt’s creation was lost. The most essential part of the painting suffered the most – the nude figure of Danaë, who was a character from Greek mythology. The acid burned deep through the painted layer, but what was discovered underneath was an earlier version of Danaë (Rembrandt reworked the painting ten years after its creation).

Hopes for brining Danaë back to be admired at the Hermitage museum were low, it was suggested the masterpiece be preserved and be placed into storage and a copy be displayed at the exhibit instead. However, the Soviet government and Communist Party officials instantly ordered the museum’s administrators to “Restore Rembrandt’s masterpiece as quickly as possible!”

A team of restorers worked on restoring Danaë for 12 years. It was decided not to do any repainting and instead restorers filled in and retouched the painting centimeter by centimeter under a microscope. Danaë was back in the halls of the Hermitage in October 1997. Director of the State Hermitage Mikhail Piotrovsky wrote when the painting appeared again on display “Danaë has managed to keep its soul. After disfiguration it nonetheless remains alive and radiates its mysterious light.” For preventing any more acts of vandalism she is now kept under reinforced glass.

Maigis spent some time in Leningrad’s mental institution and was later sent back to Lithuania. Later, journalists managed to find the vandal. He lived in a care home and loved to play the harmonica and had no regrets about destroying Danaë. Some say the reason he chose this particular painting relates to the day he first visited the Hermitage, when he asked the matron “How much does this painting cost? One million roubles?” To which the lady responded “Danaë is priceless! She has no price. It is a world masterpiece!”