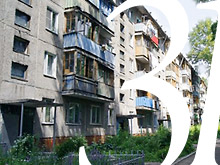 On July 31, 1956, the Central Committee of the Communist Party of the Soviet Union found a solution to the post-war housing shortage. By signing a decree on the “fight against architectural extravagances”, they began mass construction of cost-efficient housing. This document determined the style of Soviet house building and people’s perception of comfort for many years to come.

More than 16,000 of the new-style five-storey panel houses, without garbage chutes or lifts, were built during the reign of Nikita Khrushchev in the 1960s, and continued construction well into the 1980s. The nation gratefully dubbed these creations “Khrushchevka” or “Pyatietazhka” (five-storey). Their construction was cheap and a new block could be built in less than a month. A record was set in 1972 when a Pyatietazhka was erected in five days.

Inside, Khrushchevkas were distinguished by low ceilings, tiny living space, combined bathrooms and thin walls. Although planned for small families, in real life it was common to see several generations sharing a two-room flat (average living space 22 sq. meters). According to one legend, the miniature size and the model of the bathrooms was determined by Khrushchev himself. While visiting the architecture firm, he famously declared “If I can fit in, they can also.” And he did fit.

However, moving into these homogeneous houses became one of the brightest moments in the lives of millions of Soviet people who had never owned a home of their own. Khrushchevkas were paradise for young families, who had previously lived in run-down communal apartments. For them it meant no more hassling neighbors, poisoned soups, and toilet queues.

One of the most notable commodities in a Khrushchevka apartment was the so-called “fridge” situated just under the kitchen window. The peculiar in-built cabinet served as a low-temperature storage space for keeping food during winter. It substituted for a real fridge, which was an item not readily available to the average Soviet person during those years.

The Khrushchevkas were originally built as temporary housing, designed to last 25 years. Many have since been demolished or renovated, but thousands of such houses still remain to this day. The government plans to bring most of them down by 2010. However, they also promise to leave a few to stand among the buildings of the new Moscow, as monuments to the housing crisis solution that created the Soviet style.