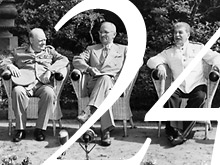 On July 24, 1945, at the post-war settlement conference in Potsdam, Germany, the US President Harry Truman “casually” mentioned to Joseph Stalin that the United States had “a new weapon of unusual destructive force”, implying the atomic bomb. To Truman’s surprise, Stalin showed less than no interest in the news, from which Truman inferred that Stalin hadn’t taken in what the true implication of this announcement was.

The then British Prime Minister Winston Churchill, who was also present at the conversation, observing it from afar, confessed in his memoirs how important it was to track Stalin’s reaction and commented, “He seemed to be delighted, ‘A new bomb! Of extraordinary power! Probably decisive on the whole Japanese war! What a bit of luck!’ This was my impression at the moment, and I was sure that he had no idea of the significance of what he was being told… As we were waiting for our cars I found myself near Truman, ‘How did it go?’ I asked. ‘He never asked a question,’ he replied. I was certain therefore that at that date Stalin had no special knowledge of the vast process of research upon which the United States and Britain had been engaged for so long...”

The reason for Stalin's composure was easy to explain: he had been receiving information about the atomic bomb program from the Soviet intelligence services since the fall of 1941. Besides, the “home-made” bomb, in production by the design bureau of academician Igor Kurchatov at the moment, was to be released shortly.

Soviet Marshal Georgy Zhukov in his memoirs revealed the Soviet view, “Churchill and many other Anglo-American authors subsequently assumed that Stalin had really failed to fathom the significance of what he had heard. In actual fact, on returning to his quarters after this meeting, Stalin, in my presence, told Molotov about his conversation with Truman. The latter reacted almost immediately, ‘Let them. We'll have to talk it over with Kurchatov and get him to speed things up.’"

As soon as Harry Truman received a telegram on July 16, 1945, informing that the first nuclear bomb testing had been successful, he realized his need for the help of the Soviet Union in the war against Japan was no longer crucial. An atomic bomb in the arsenal could have rendered any major military intervention moot, while accepting the Soviet help would have obliged the allies to include the Soviet Union in the post-war negotiations regarding Japan. One of Truman’s goals, therefore, was to slowly drive the Soviet Union out of the already collapsing alliance.

At the Potsdam Conference, however, President Truman only chose to express vaguely about the existence of the atomic bomb, and, struck by Stalin’s indifference, stopped any further discussions of the subject, which in fact raised an uncertainty as to what purposes Truman’s behavior had served.

Some historians are positive that there was no evidence of Truman putting pressure on Stalin or, what’s more, threatening him. Truman never took advantage of his atomic bomb monopoly; nor did he start negotiations from a position of strength, since the coalition was already on the verge of collapse. Truman’s actions are even seen as intentions to maintain partnership relations with Stalin, and all complications only arose since it was not an easy task altogether.

Others argue that Truman’s only purpose was to threaten the Soviet Union, the goal he later accomplished by dropping the bomb on Hiroshima and Nagasaki in August of 1945. This act is interpreted as blackmail of the Soviet Union in the framework of the Cold War and not a weapon against Japan, which would have surrendered eventually without so drastic measures.