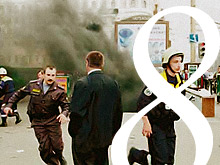 On August 8, 2000, a powerful explosive hidden in a plastic bag and left in the pedestrian underpass in the heart of Moscow claimed the lives of 13 and left 118 injured.

According to eyewitnesses, during the evening rush hour just before the explosion, two Caucasian men approached a kiosk in the underpass of Pushkinskaya Square. After selecting an item to purchase they claimed they needed to go and exchange some currency. Leaving a briefcase inside a plastic bag on the floor they ran out of the underpass and a few minutes later the bomb exploded.

In the blink of an eye all shops located in the underpass turned into a pile of glass and twisted metal, sending dozens of people fleeing the fire that enveloped the walkway. Seven people were killed on the scene and six more died later in hospital. Many of the injured were children.

The strength of the explosion was estimated at between 500 to 900 grams of TNT. The bomb contained cyclonite and was filled with shrapnel to increase its destructive force. Intensifying the fire were the spray cans and deodorants sold in the kiosks of one of the most popular meeting places in Moscow, located just under the Pushkin monument.

According to some reports the bomb was made out of the same materials as the bombs used in the series of Moscow apartment explosions in 1999, suggesting a possible link to Chechen rebels also held responsible for the attacks.

No organization claimed responsibly for coordinating the blast. Several Chechen and Dagestani nationals were briefly detained as suspects in the course of the operation but soon released without any direct evidence against them. The Chechen leadership denied any involvement and even suggested that the Russian FSB staged the blast to win public support for the ongoing Chechen war.

While terrorists appeared to be the most likely perpetrators, authorities were also examining the possibility of the involvement of organized crime. According to official materials, every kiosk located in the underpass brings its owner the profit of not less than $10,000 monthly. A possible dispute between criminal groups over the division of trading territories in the underpass was a major theory pursued but led to no arrests being made.

Although more than 6,000 people were questioned in the course of the investigation no one has been held responsible to this day. A marble monument with the inscription “To those who died and suffered in the terror act of 8 August 2000” today stands in the exact place where the bomb went off.