Sitro is a non-alcoholic carbonated drink that smells of lemons, tangerines and oranges.

The name originated from the French citron (lemon). According to legend, the drink made from lemon peels was brought to Russia from Paris in 1812 by Russian soldiers and officers – after they defeated Napoleon’s army.

The “rebranding” of the drink took place in the USSR in the middle of the 1950s when the authorities sought to boost to the development of carbonated water production in the country. First, the brand was called “Extra Sitro” but then it was reduced to only the second word. The creators of the drink wanted to keep “the mysterious name of French origin as an attraction.” The first sitro labels were decorated with sights from both Paris and St. Petersburg.

Sitro became one of the two most widespread names of lemon-based drinks in the country. The other one is limonad (“lemonade”). The difference between the two is that sitro, aside from the lemon acid, sugar and syrup, contains the flavor of tangerines and oranges. In limonad you may find some other fruit additives – like apples and pears.

Carbonated water consumption was quite unique in the USSR. In parks and on the streets of Soviet cities there were lots of bubbling water machines that sold the sitro and other brands by the glass. All you had to do was insert a coin into the machine and 15 seconds later you got the mix of soda water and lemon syrup. Some clever kids noticed that it was much tastier to fill half of the glass first, then take a second coin and fill the remaining part. The secret was simple: it was the delicious syrup – not the water – that always came out first.

It was much harder with sitro bottling operations. The price of one bottle was 27 kopecks – as much as the bottle of beer. This made the drink barely affordable for many Soviet residents on a daily basis. Sitro and other carbonated drinks became a holiday feature for kids. You could hardly find a festivity table in the country that did not have a bubbly bottle on it.

Sitro has been mentioned by many Soviet writers of stories and poems for the younger generation. School kids in many Russian films dreamt of it during lessons. If they decided to skip school, the first place they went was a sitro machine somewhere in the park. This drink was also used as fuel for a car in the stories about Dunno by the children’s writer Nikolay Nosov – a fairy-tale in which the main character does not know much but is always lucky due to his good nature.

Years went by but the technology of sitro production remained unchanged. It was produced in small volumes, which did not let manufacturers keep the price low. The glass bottle alone accounted for one third of the cost. You could easily exchange water for money at special stations – but there were not many of them in the cities. Some people did not bother themselves with it.

Most sitro was produced at small factories. Some were located in rural areas. The workers of these plants realized that if you mix the sitro substance with alcohol you did not need vodka any longer. That “scientific discovery” helped many men live through 1980s – a time when the volume of vodka production was much lower than the demand.

In the middle of 1970s Pepsi entered the Soviet market. So the allegiance of the consumers immediately shifted to the “American drink,” as some people used to call it. At the end of the 1980s Cola-Cola also made a debut in the USSR. This was a major setback for all sitro producers. 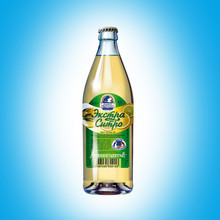 The recovery of Russian sitro started at the end of the 1990s when some businessmen relaunched the production of the almost forgotten drink. Many regional producers now sell it in many cities around the country. The brand survived the ban of the Russian authorities to use the name of the fruit for the carbonated drink but sitro manufacturers managed to convince authorities that it would not be wise to “freeze” the brand with a lot of history behind it. It still sells despite the protests of many health-oriented Russian parents, who claim carbonated drinks like sitro are unhealthy for their children.

Here’s a recipe for homemade sitro: just slice some lemon peels into tiny little pieces and put them into the pot. Then squeeze in the juice of 4 lemons – add some sugar (according to your taste) and fill with water to the top. Heat the pot for 10 minutes. After that, put the drink into bottles and let it cool down.