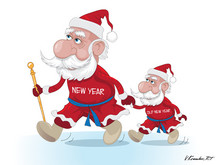 While it may sound like an oxymoron or a paradox, for many Russians the winter holidays aren’t finished until January 14, when they celebrate Stary Novy God: Old New Year.

In fact, tradition dictates not to take down the Christmas tree until then. Old New Year marks the changing of the year according to the old Julian calendar, instead of the Gregorian calendar that the world officially uses today. According to recent polls, more than half of all Russians observe Old New Year in some way.

Though the Gregorian calendar was established by Pope Gregory XIII in 1582, Russia did not adopt it for official purposes until after the Bolshevik Revolution in 1918. The Russian Orthodox Church did not adopt it at all, and still adheres to the old Julian calendar. Russians, therefore, have separate dates for some holidays, including New New Year and Old New Year. In Russia, though, Old New Year is not an officially-recognized holiday and workers are not given the day off for observance or celebration. During the existence of the Soviet Union, and its suppression of religion, the holiday was almost entirely abandoned.

New New Year is an official holiday, and the one that Russians celebrate most heartily. This leaves Old New Year as a more relaxed time when Russians celebrate as they please. Some see it as a nostalgic holiday and spend it at large family gatherings where they eat and sing carols. Others see it as simply another reason to go out and party with their friends and colleagues, especially if it falls during a weeknight. They often eat traditional holiday foods. They may bake dumplings with small objects inside, like a button or a thread; the diner who discovers the object is said to receive good fortune in the year ahead.

While Old New Year has a special place in the modern Russian culture, it’s not the only country that recognizes the occasion in some way. Many of the former Soviet republics, including Armenia, Belarus, Ukraine, Moldova, Georgia and Kazakhstan, as well as Eastern European countries where the Orthodox Church is the prevailing faith, observe the holiday – either formally or informally. Additionally, parts of the Scottish Gaelic community use the day as a way to celebrate and promote Gaelic culture. Some German-speaking areas of Switzerland also observe Old New Year under the name St. Sylvester’s Day.

Rukomoinik The rukomoinik - literally "hand-washer" - is a simple water dispenser, used in the Russian countryside or wherever water mains aren’t available.