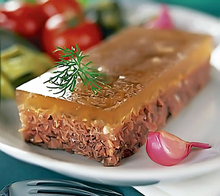 Kholodets (also called studen in some parts of Russia) is a jellied meat dish of traditional Russian cuisine. It gets its name from kholod, the Russian word for cold and is an essential part of winter holiday festive meals. However it can be cooked anytime – as long as you have seven hours to plunge yourself into the cooking process plus extra time for some preparations before cooking.

Russians usually go to a farmers' market to buy only fresh meat for kholodets. When served, it resembles a rectangle of jelly or it takes the shape of the dish or basin where it was chilled. Often, pieces are several inches high, containing pieces of meat clearly seen through the transparent broth-turned-jelly. Kholodets is served cold. Kholodets is a perfect appetizer and the best companion of vodka, it is often eaten with a generous helping of strong horseradish sauce or the incredibly hot Russian mustard.

The history behind meat jelly 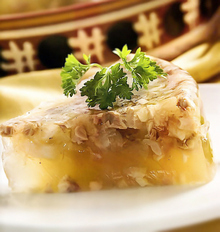 As with many Russian dishes, the origin of kholodets is a mystery. However the notion of aspic appeared in Russia in the early 19th century. Before that Russian cuisine was famous for some of its dishes cooked out of all possible ingredients left over from yesterday's meal, chopped, mixed to porridge and covered with broth.

As the very look of it didn't much tempt the appetite, it was eaten by servants only. But as Russians developed a passion for French cuisine, they started engaging French chefs who experimented with Russian style aspic, covering it with a clear broth instead of the mix of leftovers.

A challenge to cook

The recipe for kholodets is not a state secret, but a bit of rocket science is necessary, as it requires skillfull hands and an experienced eye. There are, of course, regional varieties of the basic recipe, and many households have their own personal version of kholodets with different types of meat or poultry, or even a combination of both.

One thing all cooks agree on is that true kholodets is cooked without gelatin or artificial additives. The strong broth is cooked by boiling only those parts of the carcass which contain enough jellying ingredients - usually pork legs, ears and beef tails, well cleaned by a very sharp knife.

The meat is put into water and bought to a boil. After the heat is lowered, the broth is covered, and simmered for 4 hours at least. For a firm kholodets, it is very important that the broth not be taken off the fire too early. Experienced cooks say the best method for testing the broth's readiness is to take a spoonful, let it cool and then smear it on your lips. If your lips momentarily stick together, you can be assured that your broth is ready.

Laurel leaves, peppercorns, garlic, and salt can be added in the last half hour of cooking. Then the broth is strained into another pot and separated from the meat. The cooked meat is then cleaned off the bones, cut into bite-sized pieces and then placed in the tray where the dish is to be cooled.

The traditional Russian recipe strictly forbids the use of a mincing machine; the meat should be chopped by hands or just separated into fibers. Then the meat is covered by the broth and refrigerated for about 24 hours until it becomes firm. Sometimes the Russian aspic cooked from too fat a piece of pork can be covered with a layer of lard after cooling – it’s normally taken off with a fork or a knife, and in some households it’s used as frying grease for potatoes, for instance.