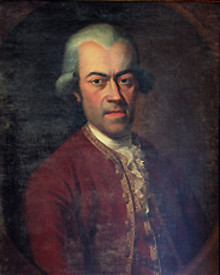 August Ludwig von Schlozer was a German and Russian historian and statistician who helped lay the foundations for the study of Russian history and modern statistics. Incredibly active scientifically, philosophically and politically, he is known for his controversial development of the ‘Normanist Theory’ in Russian history, as well as his revolutionary philosophical views on statistics. His contemporaries even went as far to say Schlozer was for Germany what Voltaire was for France, or Bolingbroke was for England.

Early studies and journey to Russia

August Ludwig von Schlozer was born at Gaggstatt, Wurttemberg, and in 1751 he followed in his family’s tradition and began studying theology at the University of Wittenberg. However, in 1754, he transferred to the University of Gottingen to study history. After his studies he went to Stockholm in 1755, writing his work “An essay on the general history of trade and of seafaring in the most ancient times” (1758) on Phoenicians in Swedish, which brought him relative success. It was also during this period that he first began to contemplate the idea of studying the east, but as his financial affairs stood, there was no way he could afford the kind of broad and in-depth analysis he envisioned. However, history would provide him with his opportunity. In 1761 he was invited by the famous historiographer Gerhardt Friedrich Muller to travel to St. Petersburg in Muller’s employ as his family’s private tutor. Schlozer accepted the invitation, agreeing to be paid the sum of 100 rubles a year. Schlozer gave himself three tasks he wished to accomplish while in Muller’s employ in St. Petersburg: first, to study the Russian language, second, to assist Muller in his various publications, and third, to start his own in-depth analysis of Russian history based on several original documents. However, Muller’s historically difficult character, combined with Schlozer’s displeasure with being relegated to a subordinate role led them into conflict in 1762, which resulted in a break between the two. Afterwards, Schlozer petitioned the Petersburg Academy of Sciences for full tenure.

Schlozer’s request was granted, and in 1762 he became a member of the Petersburg Academy of Sciences where he hoped to revolutionize the study of Russian history with his innovative philosophical views on statistics. Schlozer’s theories were extremely unique; he was the first to understand and define history as the study of government, cultural, and religious life, combined with statistics, politics, and geography. He understood ‘statistics’ to be an independent scientific field of study, but at same time identified it as a sub-category of ‘politics’, comparing the relationship between the two fields to the studies of ‘anatomy’ and ‘medicine’; the ‘art of healing’ (medicine) is impossible without the knowledge of ‘anatomy’, and ‘anatomy’ on its own is insufficient to understand how to ‘heal’. According to Schlozer, ‘history’ could only be understood and studied as a combination of all of the above disciplines. He is quoted as saying “History is statistics in motion. Statistics is stationary history”.

Conflict with the Academy and departure from St. Petersburg

However, in spite of all his revolutionary theories and research into Russian history, Schlozer often found himself at the heart of controversy, with both Mikhail Lomonosov and Muller his most common adversaries. Eventually, Empress Catherine the Great herself had to intervene in the conflict, allowing Schlozer to continue his study and work under her special protection, and granting him an 860 ruble yearly salary (the highest at the Academy at that time) until the end of his contract in 1770. However, in spite of these successes, Schlozer felt that there was no way for him to advance beyond his current position at the Academy. In 1764 he left his position and his yearly salary of 860 rubles and moved back to Gottingen, Germany, where he would remain. He planned on publishing what he thought would be his greatest work, “Rossica” in German, in various volumes over the course of three years, however, he was met with fierce opposition again stemming from Lomonosov and Muller. Muller, already at the heart of his own heated battle with the Academy, was particularly vocal, expressing his worries that if the published material was found to be controversial then the blame would fall on Muller himself. Schlozer eventually became displeased with the working conditions in Gottingen, and in 1770 he made an attempt to return to the Academy, but was unable to reach an agreement with them. Although he left behind a broad legacy of philosophical, scientific, and historical publications in Russia and Germany, he would never return to St. Petersburg.