Since the fall of communism, religion has thrived with churches and monasteries springing up all over the country

Decades of Soviet rule have left their mark: up to half of Russians declare themselves atheists, although figures vary. Among believers Orthodox Christianity dominates, but smaller Christian denominations also exist. 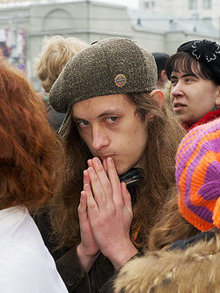 Religious holidays, banned after the 1917 revolution, are now back on the Russian calendar. Christmas and Easter are once again marked in grand fashion. Still, Russian Christians do it differently from the West. Soviet Russia adopted the Gregorian calendar, already widely accepted by most of the Western world. But the Russian Orthodox Church still used the old Julian calendar that now falls 13 days behind. Instead of December 25 Russian Christmas is marked on January 7. The same goes for the other religious holidays – when Europe’s finished celebrating, Russia only begins to gear up for the festivities.

Since ancient times, the largest and most important Russian Orthodox monasteries were called “Lavra” (from the Greek “monastery”). Russia has two. The Holy Trinity-St. Sergius Lavra, 70 kilometres from Moscow, was founded in the 14th century by the St. Sergius of Radonezh, one of Russia’s most revered saints. The monastery and the city built around it, Sergiev Posad, are a Russian Vatican of sorts. A major spiritual magnet and a unique historical site, the Laura is world-famous for the rare beauty of its murals and the enchanted singing of its choir.

Alexander Nevsky Lavra was founded by Peter the Great in 1710 in St. Petersburg – seven years after the city itself. Construction works lasted for almost a century. The monastery complex is home to some of St. Petersburg’s oldest buildings. From the outset, the Lavra was known as the most prestigious burial site in Imperial Russia where members of the royal family, priests, prominent poets and composers were laid to rest.

The Cathedral of Christ the Saviour (photo by Irina Vasilevitskaya)

Back from the ruins

One of Russia’s most famous churches is the Cathedral of Christ the Saviour in Moscow. It’s also the country’s largest. Clad in marble, its white bulk crowned with a gleaming golden dome, it is visible all over central Moscow. The original cathedral was constructed in the 19th century to commemorate Russia’s victory over Napoleon. It took more than 40 years to build… and only a day to reduce to rubble on Stalin’s orders in 1933. Rebuilt in the 1990s, it’s become a symbol of Russia’s spiritual revival and the newly found power of the Russian Orthodox Church.

Russia’s second most popular religion is Islam. It’s thought the country is home to around 14 to 20 million Muslims, making up 10 to 16 per cent of Russia’s population. Almost all Russian Muslims are Sunnis but there are small pockets of Shiites in the Caucasus. Russia’s Muslims mainly live in the Volga Region and the North Caucasus, although Moscow and St. Petersburg also have thriving local communities.

The largest Islamic centres are Tatarstan and Bashkortostan. The republic of Tatarstan on the Volga River has as many as 1150 mosques. Its capital Kazan, an ancient Tatar stronghold, boasts the largest mosque in Russia and, reputedly, in Europe – the Qolsharif Mosque. Built in the 16th century, it was destroyed in 1552 during Ivan the Terrible’s Tatar campaigns, when his armies captured Kazan. Now looking decisively modern, it’s the gem of the city’s architectural landscape.

Buddhism made its way to Russia in the late 16th century, when Russian explorers travelled to and settled in Siberia and the Far East. Russia’s key Buddhist centre is Kalmykia. Vast steppe land on the north-western shores of the Caspian Sea, the republic of Kalmykia is the only place in Europe where Buddhism is the major religion. Descendants of the nomadic Mongols, the Kalmyk people revere the Dalai Lama, who visited the republic in 2004. Buddhist teaching is also widespread in Tuva and Buryatia. Located at the midpoint of Asia, the republic of Tuva is famous for its bewitching throat singers. The Buryat Republic, along the eastern shore of Lake Baikal has a strong tradition of Tibetan Buddhist medical practices.

In the 1930s the temples were closed down or burnt and many monks fled or were arrested. But with the beginning of Gorbachev’s era, the Buddhist revival gathered pace and dozens of monasteries were rebuilt. Buddhist centres also opened in many large cities, including Moscow and St. Petersburg.

Get to know the biggest country: