A tongue of harsh accents, alien alphabet and a reputation as being hard to crack…

Russian may be all that and more but it’s certainly not the only language spoken in Russia. About 100 others are used across the country. But you don’t need to know all of them – Russian is official throughout the nation, although there are various co-official languages in different regions. 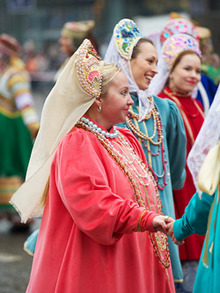 Russian belongs to the Indo-European family, which ties it to Greek and Latin. Its closest spoken relatives are Ukrainian and Belarusian. Over the centuries, its vocabu lary and style have been influenced by German, French and English. Modern Russian also includes a large number of international political, technological and scientific terms.

Until the 1917 revolution, Russian was the only official language of the Russian Empire. In the  Soviet Union, it enjoyed a privileged and unifying status. After the fall of the USSR, most ex-members reverted to their native tongues, with only Belarus, Kazakhstan and Kyrgyzstan keeping Russian as an official language alongside their own.

The USSR’s superpower status guaranteed Russian worldwide prestige. It was taught in the Soviet satellite states in Eastern Europe but after the Warsaw Pact collapsed, the language was dropped as a must-have on school programmes. Still, it remains one of the official languages of the United Nations, and is widely used across the former Soviet Union. Fed by several waves of immigrants since the beginning of the 20th century, large Russian-speaking communities, each with its own flavour of language, exist in Israel, Germany and Turkey. In the US, New York City’s Brighton Beach has long been dubbed “Little Odessa” – many of its residents having come from the Ukrainian port. It’s estimated that Russian is spoken by more than 200 million people worldwide.

The Russian alphabet, known as Cyrillic, goes back to the ninth century. Its most ancient version was devised by two Greek missionaries – brothers Cyril and Methodius, both outstanding scholars and linguists. The alphabet assumed its modern shape in the 17th century under Peter the Great, while the written Russian of today was introduced by the Soviet government in 1918. The reform didn’t just simplify the writing but symbolised a break with the Tsarist past.

Get to know the biggest country: