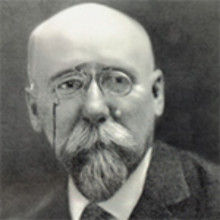 Fyodor Sologub is not a household name in Russia, but the man behind it -- poet, essayist, dark dreamer and tortured soul -- would most likely not have had it any other way.

Widely hailed as the main proponent of the fin-de-siecle movement in Russia, Sologub left a lasting imprint on the Silver Age of Russian poetry.

To start with, Sologub wasn't his real last name. He was born in 1863 into the family of Kuzma Teternikov, a St. Petersburg tailor. When Fyodor was four years old, his father died of tuberculosis. To make ends meet for herself and her two small children, his mother became a servant in a rich aristocratic family.

Though later in life Sologub would write "we were children of celebration - my sister and I," in fact, they were anything but. The family went through many hardships, and very early on Fyodor was determined to make it big in order to pull his family out of penury. 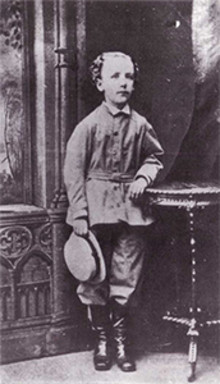 In 1882 Sologub graduated from the St. Petersburg Teacher's Institute. He almost immediately took a teaching job in a small rural town and moved there along with his mother and sister.

In 1884 he published his first work, a poem for children titled The Fox and the Hedgehog, under the name Ternikov.

Over the course of the next five years Sologub's teaching career took him to several other small towns. Though he strove to break through into the literary world, his remoteness from the epicenter of Russia's cultural life - both physical and psychological - kept him from fulfilling that wish.

Yet ten years of observing Russia from the "back yard" allowed him to make observations which proved valuable when writing his first major piece, A Petty Demon.

In 1892 Sologub finally moved back to St. Petersburg. He continued to teach, and started work on A Petty Demon. The Northern Herald (Severniy Vestnik) journal started publishing some of his early works, and it was upon the advice of one of the editors that Fyodor dropped Teternikov as his last name and took on the more poetic-sounding Sologub.

In 1897 Fyodor Sologub ended his cooperation with The Northern Herald, and switched his allegiances to the journal North (Sever). In 1899 he received an appointment at the Andreevskoye municipal school. He was given a residence at the school, where he relocated with his sister, who was suffering from tuberculosis. His mother had died several years earlier. Many of Sologub's fellow writers and poets wrote of the impending feeling of doom the writer was experiencing, which manifested itself in his writing. 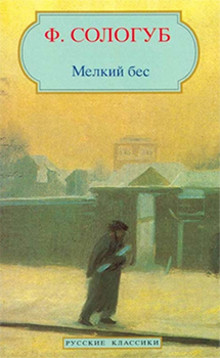 Cover of A Petty Demon by Fyodor Sologub

That despair showed in his major work, A Petty Demon, which Sologub spent ten years writing and completed in 1902. The novel showed the harrowing world of a provincial teacher, soulless and sadistic Peredonov. Lusting after the post of inspector of municipal schools, Peredonov slowly loses his mind out of fear of losing the seemingly imminent promotion. His paranoia reaches its climax when his supposed adversary shows up for a drink at Peredonov's house and an innocent joke soon turns into tragedy.

The characters and setting of the provincial town were painted with such dull, depressing colors, many questioned whether such pettiness existed at all. Sologub wrote in a foreword to the second edition of the book that he had to tone down the disgusting qualities of some of the characters, as no one would have believed in them otherwise. Yet he insisted all of them were painted from real people he met. In fact, Sologub wrote, the book is a portrait of his contemporaries - a very polished, carefully constructed reflection.

Sologub created an aura of mystery and certain morbidity around him. As his success grew, he began hosting literary evenings in his home. Guests like Leon Bakst, Alexander Blok,  and Teffi came to read and listen. The host read his own poetry, heavily strewn with themes of mortality, sexual ambiguity and mysticism.

Sologub demanded his guests listen carefully to each other's readings, but it seems many could not stay focused on poetry for hours and let their attention wander elsewhere, with only the host carefully hanging onto every word.

In her memoirs Teffi wrote about one time it was her turn to read at such an evening. Though she ran out of poems to read, Sologub demanded more. Teffi then read one of Alexander Pushkin's poems by heart, with no one noticing, and only at the end of the evening, when saying his good-bye to her, Sologub muttered "yes, yes, Pushkin wrote great things."

After the death of his sister, according to Teffi, Sologub's life took a sharp turn. 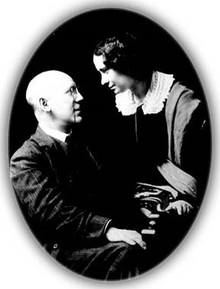 He married Anastasiya Chebotarevskaya, a translator, in 1908. The new wife prompted a change of place - the couple rented a bigger apartment, furnished it with gilt chairs, hung paintings of mythical Leda on the walls of his study. The literary evenings, quiet and thoughtful until now, turned into rambunctious parties.

Many of his friends said his new life resembled that of a Roman patrician during the decay of the Roman Empire.

Chebotarevskaya, in the meantime, made a fuss around her husband, worrying that his genius wasn't appreciated. She wrote numerous letters to various publications, demanding better treatment for Sologub - letters which Teffi called "unnecessary and damaging to Sologub's reputation and career." Chebotarevskaya perhaps saw schemes against her and her husband where there were none.

Many of Sologub’s friends believed Chebotarevskaya involved herself too much in her husband's work. In fact, they believed his later writing suffered greatly because he allowed his wife's influence to hamper the process. Some believed she was the one writing the works, which were then published under her husband's already prominent name.

After the revolution of 1905, which Sologub welcomed, his writing career flourished.  He published plays, poems, and translations. In 1909 he went to France with his wife, his very first trip abroad. Between 1909 and 1911 Sologub published a 12-volume omnibus of his works. In 1913 his lecture "The art of these days" gained tremendous success in St. Petersburg, prompting a lecture tour across Russia the same year.

Sologub became a celebrity, with journalists following him around even to the opera to get his impression of the performances. Actors read his poetry off the stage. Artists queued up to paint his portrait.

In 1917 Sologub welcomed the February Revolution, but was staunchly against the Bolsheviks, opposing the October Revolution. He remained in St. Petersburg, which was renamed Petrograd, while many of his friends immigrated. Sologub continued to write for various publications, but soon many were shut down. Unable to make a living through his writing, Sologub was forced to sell his possessions.

On his initiative, members of St. Petersburg's writing and artistic elite formed a society for the protection of works of art. They wrote numerous letters to Bolshevik authorities, calling to prevent the pillaging and takeover of museums and galleries, and to preserve the works of art at the Hermitage. The letters were left without response.

As Sologub's situation deteriorated, he applied for permission to leave the country. His numerous requests, even to Lenin himself, went unanswered until 1921, when a letter from Leon Trotsky announced Sologub and Chebotarevskaya were free to leave Russia.

Unfortunately by this time Chebotarevskaya, who had started showing signs of schizophrenia in the early days of the revolution, could not stand the pressure any longer. Two days before their departure she jumped off a bridge in St. Petersburg and drowned.

Stricken with grief, Sologub remained in Russia, never fully recovering from the shock of loss.
“You live in the world/ like in a darkest forest,/where demon upon demon/ a beast with beasts like you”, he wrote in one of his last poems.

In 1927 he became seriously ill, and died in December, as he himself predicted in one of his works. He was buried next to his wife at the Smolenskoye Cemetery in St. Petersburg.

Unfortunately, Sologub's legacy was largely forgotten during the Soviet period. The government preferred either loud, daring modernist poets, or classics like Pushkin and Tolstoy, whose works they didn't deem too hard for the masses to comprehend. Nevertheless Sologub's at times gentle, at times morbid, and always elegantly doleful poetry and harsh, moribund prose, which took Imperial Russia by storm during its last day, are truly some of the most prized possessions in the country's literary bank.