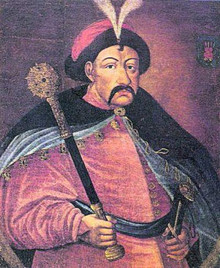 Bohdan Khmelnitsky was a Cossack military leader and the father of the Ukrainian nation. He freed Ukraine from the rule of Poland and preserved its national identity by bringing it under Russia’s protectorate. Ultimately he brought it into the "eternal union" of all Russias — Little (Ukraine), White (Belarus) and Great Russia. The Ukrainian people have named a city and a region after Khmelnitsky and his image remains a central figure on pictures, monuments and landmarks and is also featured on Ukrainian currency.

Bohdan Khmelnitsky was born around 1595 into the family of a Cossack officer, who was serving in the army under the Polish Crown. Before joining the army, Khmelnitsky received his education at a Jesuit College – this gave him a broad knowledge of world history and fluency in Polish and Latin. However, unlike many of the other Jesuit students, he did not embrace Roman Catholicism but adhered to Greek Orthodox Christianity.

After Khmelnitsky finished his education, he joined his father’s army and took part in the Polish war with the Turks. In 1620 the Polish troops were destroyed at the Battle of Cecora and his father was killed. Khmelnitsky was taken captive by the Turks. He spent two years in captivity, while his mother collected money for ransom. Despite the strenuous slave labor in the Turkish navy galleys as a rowing oarsman, the time spent in captivity made Khmelnitsky stronger and wiser - he even mastered Turkish and Tatar, something that later helped his success as a leader.

Military service with the Cossacks

In 1622 Khmelnitsky finally returned home. He joined the troops of the registered Cossacks, who were serving the Polish King. Cossacks traditionally inhabited the lands of modern-day Ukraine, however, they were a people with no country who collectively decided to sell their military services. Many Cossacks were listed in a special registrar made up by Poland, and were paid high wages for their service. Khmelnitsky made a name for himself in the Smolensk war against Moskovia (Muscovite Tsardom, which at the time was gaining strength and was trying to expand towards the West) and was even awarded a special sable from the Polish King Vladislav IV for bravery.

Because of his education Khmelnitsky was assigned to be the regiment scribe and later a lieutenant in Chyhyryn, located in modern-day central Ukraine. His success and popularity propelled him even higher - in 1637 Khmelnitsky was elected Captain of the regiment of the Chyhyryn registered Cossacks. He then married and settled down in the family estate of Subbotovo, which the King of Poland had awarded to his father.

Khmelnitsky’s charisma commanded the respect of his subordinates and his fame as a leader had spread far beyond the army. By this time he was nearly 50 years old. He had made a reasonably successful career and had settled down, concentrating his efforts on maintaining and furthering his estate. However, the events that followed changed not only the course of Khmelnitky’s life but that of the whole country.

In 1646, during his absence from Subbotovo, Daniel Czaplinski, a Polish nobleman who had set his eyes on Khmelnitsky’s property long ago, raided the estate of the Cossack captain, beating his son to death and capturing his wife. Perhaps he could have gotten away with such an arrogant move, had Khmelnitsky not gained so much strength and popularity by that time. After his numerous appeals to the court brought no results, Khmelnitsky decided to lead a revolt against the Poles, whose dominance of the territories was already wearing down the local population. The respected Cossack leader, who’d provided the Polish Crown with exemplary service, now turned into a raging rebel.

In 1947 Khmelnitsky took a group of his faithful supporters and fled to Zaporozhskaya Sech, the command center of the Cossacks. There he found the much needed support of his friends and subordinates to fight against Poland. Together, they destroyed the Polish troops overseeing the Sech and drove them out of their watching post on the nearby island. Soon after that the Zaporozhye Cossacks declared Khmelnitsky their new hetman, which put him in charge of four thousand experienced warriors. He was no newbie in the war business and well understood that to beat the Poles he would need a much stronger army than what he had. 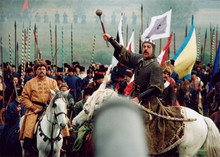 A snapshot from the Ukrainian film about Khmelnitsky

Khmelnitsky decided to ask the Crimean Tatar Khan for help. This is when the knowledge of Tatar learned years ago in captivity brought him the favor of the Tatar Khan – he went to him on his own, with no mediators and asked for help. Khmelnitsky’s timing couldn’t have been better, as his proposal coincided with a period of strained relations between Poland and the Crimea. In return for his alliance, Khmelnitsky pledged the Cossacks’ loyalty and promised to end their raids against the Khanate and Turkish territories. Khmelnitsky swore on his sable and left his son Timofey hostage in Bakhchisarai as a token of his faithfulness.

The Tatars kept their promise too. In spring 1648, the Zaporozhye troops were joined by a four-thousand strong army of Tatars. The army set off on its campaign towards Ukraine, with some two thousand more Cossacks joining Khmelnitsky along the way. The Poles learned about Khmelnitsky’s plans and sent some five thousand warriors to combat them. Khmelnitsky knew that the Poles had sent mostly registered Cossacks, and so went to meet them. It was a hearty meeting – the Cossacks threw their Polish commander into the water and joined the army of the rebels.

The second group of troops sent by the Poles was easily destroyed. As for the main army of some 20 thousand – Khmelnitsky tricked them into retreating back to where his troops were waiting to attack. The Poles would have been totally massacred if it hadn’t been for the Tatars. According to the treaty Khmelnitsky had made with the Crimean Khan – all captives were theirs by right.

In just a few months, the unstoppable troops of Khmelnitsky grew to 100 thousand, joined by more volunteers. They freed the Ukrainian territories from the Poles. Khmelnitsky was hailed as a second Moses, who liberated his people from the slavery of Poland.

Khmelnitsky’s dramatic victories left a number of complications, however. Because neither party had enough military strength to win a decisive victory they would war with each other, and then conclude their campaigns with negotiations, making unsatisfying settlements, only to resume another war a year later. Soon the tremendous bloodshed and destruction began taking its toll. Both the Ukrainians and the Poles were less eager to fight and the conflict remained unresolved. To maintain his conquests Khmelnitsky needed the reliable support of a strong and recognized foreign power. 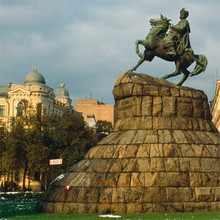 A monument to Bohdan Khmelnitsky in Kiev

Khmelnitsky’s choice fell on Moscow, mainly because like Ukraine it was Orthodox. He had asked for help from the Tsar from the very start of the uprising, however, Moscow was already badly scarred from its own recent war with Poland, and preferred to wait and see the outcome of the Polish-Ukrainian wars before taking any action. Finally, in 1654, Khmelnitsky held a meeting with the Cossack elite. Of the four leaders, including the Polish king, the Tatar Khan, the Ottoman Sultan and the Muscovite Tsar, the latter was deemed the best candidate to become the Protector of Ukraine. Some 117 Ukrainian towns and 127 thousand people swore an oath of loyalty to the Muscovite Tsar Aleksey Mikhailovich.

Bohdan Khmelnitsky died on August 6, 1657, just a few years after the great climax of his life. The new hetmans tried to break the treaty with Moscow, however the majority of Ukrainian Cossacks remained faithful to their oath to Russia, and the union stood strong. Khmelnitsky created a whole new epoch, which marked a turning point in the history of Ukraine, Russia and Eastern Europe.

For Moscow, which was somewhat isolated before, it was a giant leap toward closer links with Europe and expanding its greatness. As for Ukraine, despite the criticism of Khmelnitsky’s annexation of Ukraine to Russia, it had a great impact on the country’s history and self-definition. Some historians compare the significance of Khmelnitsky’s impact on Ukraine to that of Cromwell on England and Wallstein on Bohemia. Khmelnitsky liberated Ukraine from decades of right-less subordination to the Polish Crown and won it the right to self-identity and freedom as a nation.