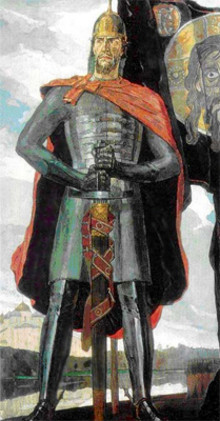 “Whoever comes to us with a sword, from a sword will perish…” Every Russian student learned these famous words of Aleksandr Nevsky in primary school. He uttered the infamous sentence after accomplishing a series of crucial victories over German and Swedish invaders. The Grand Prince of Novgorod and Vladimir did a lot for his country during the most challenging times in its history. For that reason many Russians nowadays consider him to be one of the most important heroes in their nation’s history.

The roots of the warrior

Aleksandr Nevsky was born in Pereslavl-Zalessky – one of the major strongholds in the Vladimir Principality. He was named after the Christian martyr Saint Alexander, whose birthday was usually celebrated on June 9 – ten days after Aleksandr was born. One of his ancestors was Prince Yury Dolgoruky, the founder of Moscow. Bound by the law of that time, Aleksandr had no chance of becoming a prince in his home principality, since he was the youngest of all the brothers in his family.

When the boy turned 3, his father Prince Yaroslav invited one of his boyars, Fyodor Danilovch, to teach little Aleksandr reading and writing. He also learned a lot about the history of the Ancient Rus and the people who ruled it. Later on, Aleksandr moved on to developing combat skills and perfected horseback riding.

His father often took the boy with him when he was reviewing complaints or issuing crucial orders. The boy learned a lot about diplomacy and the art of negotiations. Special attention was paid to the discussion of critical issues with his boyars. “You should endure more than your people” – that was the key principle Prince Yaroslav taught young Aleksandr.  His governing style was marked by utter devotion to his people and indomitable courage in times of trouble. The Chronicle of that time describes him as follows: “He was taller than others, and his voice reached people as the sound of the trumpet, and his face was like the face of Joseph, whom the Egyptian Pharaoh placed as next to him as the king of Egypt. His strength was part of the strength of Samson, and God gave him the wisdom of Solomon ...”

In 1236, when Aleksandr turned 16, he was summoned by the people of Novgorod in the northwest of the Ancient Rus. The city at that time was one of the major trading areas along the ancient trading route known as “From Varangians to Greeks”. Local merchants and boyars had developed a system of self-government called veche – a discussion forum where they assembled to address burning issues and make crucial decisions concerning the future of their city.  There they also chose which Prince they could invite from the outside to rule in their principality. After a discussion they chose Aleksandr – the youngest of Yaroslav’s sons.  At that time they needed a military leader who would protect their northwestern lands from invaders.

In the middle of the 13th century, Rus was split into many feuds and conflicts which weakened the state as a whole. The Tatars and Mongols kept pressure on all the lands of Rus from the East. There was also a threat from the West – Swedish and German invaders were approaching the Russian borders from the opposite side.

At that time Aleksandr proved himself a reserved and far-sighted politician.  He was convinced that an open fight with the Tatar-Mongol state of the “Golden Horde” would be nothing but a waste of his soldiers’ lives. So he decided to pay a tribute to the Khan of the “Horde” without losing the national identity of the Rus.

Alexander’s top priority was getting even with the invaders from the West - the Swedish army, known as the Livonian knights. In 1240, the Swedish army landed at the confluence of the rivers Izhora and Neva not far from the Baltic Sea coast. Their aim was to cut off access for the Rus to the sea. Aleksandr realized that the only way to possibly damage the enemy was through a sudden attack, which he executed with his sparse regiment in a fist fight in the early morning of July 15. The “Battle of Neva” forced the Swedes to turn back, sparing Novgorod from a full-scale invasion of its northern territory. Thanks to this victory, the 20-year-old Aleksandr was granted the nick-name of Nevsky, literally meaning “of Neva”.

This battle reinforced opinions of the young Prince in all spheres. However, the boyars of Novgorod soon became annoyed as they felt their power slipping away from them. The conflict with the boyars forced Aleksandr to leave the city. The decisions of the veche (the parliament) in Novgorod was law to anyone, including princes; Aleksandr spent the next year in his native town of Pereslavl sorting out local issues.

A battle for the ages

Very soon Aleksandr Nevsky was invited back to Novgorod. By that time, the Livonian knights had managed to gather all the best warriors from Germany and Denmark. The aim of their mission was to conquer the Slavic and pagan folks in the north. It took Aleksandr less than a month to gather his army and win the city back, managing to defeat one of the best cavalries of Europe.

The decisive moment of the standoff came on April 5, 1242, on the ice of the Chudskoe (Peipus) Lake (currently located on the border between the Russian Federation and Estonia). It went down in world history as the “Battle on Ice”. 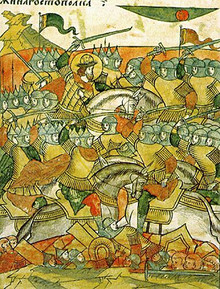 Battle on the Ice. Chronicles Miniatures

The chronicles mention Aleksandr’s first words at sunrise:“God, please be the judge of my battle with these arrogant foes attacking us”. The enemy was not aware of the trap Aleksandr had set up for them. He positioned the best Russian forces on their flanks, covering the front with only a handful of soldiers. Livonian knights used their conventional structure – they shaped their rear-guard as a cone, sometimes referred to as a “German swine”: several horsemen up front were followed by huge formations of knights.

When the Livonians were about to destroy the infantry, Aleksandr’s forces from the flanks unexpectedly attacked them, completely destroying the enemy. In addition, the ice broke under the heavy armor of the Livonian knights. Many soldiers drowned. When the knights felt their formations disintegrated, they chose to retreat, chased by the Rus for about 10 miles.

News of the battle’s outcome struck the whole of Europe – few could even imagine that the foot soldiers of Novgorod could defeat heavily-armed knights. Many historians view Aleksandr’s victory as a significant event in the history of the Middle Ages. Not only was it a manifestation of the growing Rus military power, but a pretext to the future unification of the Rus lands a century later.

The ‘Battle on Ice” made its way to the screen thanks to one of the most prominent Russian film directors Sergey Eisenstein in his 1938 film “Aleksandr Nevsky”. Throughout the movie Aleksandr is portrayed as a very serious and resolute person.  Soviet actor Nikolay Cherkasov performed the Prince as a calculating character. Many historians say that this was why Joseph Stalin favored the film immensely – he ordered a screening of the film even before the final sound mix had been completed. The top man of the USSR liked the fact that in the film Aleksandr was a person who won every battle without ever being defeated himself.

The last years of the prince

After the Livonian invasion, Nevsky went on reinforcing the northwest of the country. He signed the first peace treaty between Russia and Norway in 1251. After that, Aleksandr led his army to Finland and in 1256 defeated the Swedes who were trying to block the Baltic Sea from the Rus. 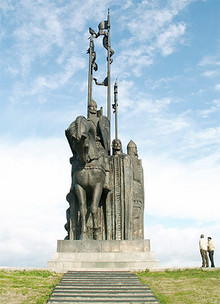 A monument to Alexander Nevsky at Mount Sokoliha

At the same time, Aleksandr resumed his diplomatic games with the Golden Horde. Unable to do away with the enemy at the moment, Aleksandr’s major goal was to possibly reduce the harm the repeated attacks from the Horde did to the scattered principalities of the Ancient Rus. However, history shows that there were not that many attacks while Aleksandr was in power. He did the best he could to strengthen his authority in other regions of the country. Aleksandr is known to have visited the Golden Horde all by himself. He managed to negotiate a treaty that stated Russians would never participate in the Horde’s battles against other nations.

After one such visit, his health deteriorated rapidly. He died in the city of Gorodets on November 12, 1263.  He was buried in the city of Vladimir near the Church of the Nativity of the Holy Mother of God. Aleksandr left five children behind. His elder son, Vasily, inherited the title of the Prince of Novgorod.

Ever since, Aleksandr has been a legendary hero for all Russians. His heroic feats are depicted in many medieval chronicles. His remains were uncovered and found to be intact before the Battle of Kulikovo in 1380 – the one in which a Russian victory against the Mongols had been foretold. In 1547, Aleksandr Nevsky was canonized by the Russian Orthodox Church. At the beginning of the 18th century, Peter the Great ordered Nevsky’s relics to be moved to the Aleksandr Nevsky Lavra in St. Petersburg, where they remain to this day.

Churches in Russia, Estonia, and Bulgaria are named after Aleksandr Nevsky. Awards in his honor were given both in Russia and the USSR to officers who showed the ability to command on the battlefield. In 2008, Aleksandr Nevsky was voted to be the greatest Russian that ever lived in a special contest organized by Russian State Television.