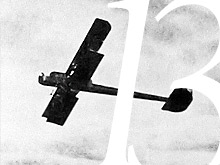 On May 13, 1913, the world's first four-engine airplane, Le Grand took off on its maiden flight in St. Petersburg with the plane's designer Igor Sikorsky at the helm.

Many of aircraft designers throughout the world had already abandoned the idea of making a large craft such as the Le Grand. They repeatedly stated that it was too big and too heavy to rise from the ground. Others claimed that if it actually became airborne, it would be impossible to control if one of its engines failed. Sikorsky’s craft passed this test and made its point.

Sikorsky had already earned popularity for designing and building helicopters, but eventually he had come to sense the advent of the huge multi-engined aircraft to carry passengers and freight over long distances in the near future.

Le Grand, the precursor of many modern bombers and commercial transports, had upstaged all other planes built up to that time. Its wingspan totaled 92 feet, it weighed about 4,500 pounds, and it had four 100-horsepower engines planted between the wings, with two at each side – one in front of the other.

The pilot's and passenger cabins were like nothing ever before seen in the aviation design. A spacious balcony occupied the front part of the fuselage, which permitted passengers to enjoy an open-air stroll. A door connected the balcony with the pilot's cabin, which had two seats and dual controls. Another door opened into the passenger cabin: a luxurious room boasted four seats, a couch, and even a washroom. Sikorsky saw his Le Grand as a pioneer aircraft, and adopted all of the conveniences in anticipation of the promising future of the passenger aviation. These innovative features were not adopted elsewhere until the middle of the 1920s.

Le Grand had a history of 53 flawless flights and a world endurance record of one hour and 54 minutes with eight passengers aboard, performed on August 2, 1913. The aircraft could have served longer if it had not been for a silly accident which had put an end to its career. While Le Grand was participating in an air show, it got damaged by a break-away engine from another craft. It never flew again, but Sikorsky had completed his objective – he proved a four-engine plane could fly successfully, leading the way for a new generation of multi-engined airplanes.