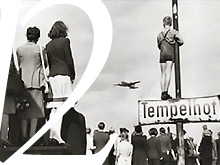 On May 12, 1949 the Soviet Union lifted a blockade of West Berlin. It lasted for almost a year and is considered the first serious crisis of the Cold War between the two power nations, the USSR and the United States.

The blockade of West Berlin was launched by the USSR on June 24, 1948. It came at a time after World War II when Germany was divided into four zones of occupation – the Soviet east, and three western zones occupied by Britain, France and America. The capital of Germany, Berlin, was also divided into sections; the biggest was given to Russia, a country whose troops occupied Berlin, and the second half was taken over by the three western allies. The divided city was destined to become a stage for the many dramatic events of the Cold War, the first of which became the blockade of West Berlin.

It is believed that the reason for launching the blockade was a currency reform, which the US, Britain, and France introduced, without the sanction of the USSR. They put into circulation the new Deutschemark in June 1948. The entire bulk of the old Reichmark which previously circulated over the entire German territory surged into the eastern zone, which risked undermining its already unstable economy. The Soviet leadership responded to the western allies by installing their own currency and imposing a blockade on West Berlin, cutting off all land and rail routes into the Western sectors.

However, according to Western specialists, the goal of Soviet leader Stalin was to force the Western powers to leave Berlin by starving it into surrender, so they embarked on supplying the blockaded city by air. This mission became known as the Berlin Airlift.

In the course of a year, nearly 300, 000 flights were made into West Berlin by British and American transport planes, delivering over 2 million tons of freight. The Soviet air force did not try to prevent the flights. American and English planes did not only make landings onto Berlin aerodromes, but also dumped freight using parachutes. More popular were the so called “raising bombers," during which they dropped candy, blocks of chocolate, raisin buns (hence the name), and other sweets from their planes, attached to handkerchiefs instead of parachutes.

After lengthy negotiations, the blockade was eventually abandoned by Stalin on this day in 1949, and the country was ultimately divided into two parts. The Western - democratic Federal Republic of Germany, and the communist state of the German Democratic Republic. In the west, the blockade was considered a start to the Cold War. Many believe that Russia was trying to lead the way in world politics, although the USSR considers this move only as a response to the actions of the West.