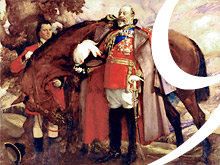 On June 9, 1908, Edward VII became the first ever British monarch to visit Russia. Edward VII met Nicholas II, who was not only the Tsar of Russia, but also his nephew.

Known as the “Uncle of Europe” Edward VII was related to nearly every other ruling dynasty in Europe. His wife, Alexandra of Denmark, was the aunt of Nicholas II, and Tsarina Alexandra Fyodorovna was also Edward’s niece. Among his numerous relatives were Queen Victoria (his mother), Eugenia of Spain, Crown Princess Margaret of Sweden and King George I of Greece.

However there was one relation whom Edward VII did not like. His difficult relationship with his nephew, German Kaiser Wilhelm II, increased tensions between Germany and Britain.

King Edward met his Russian nephew on the waters of the Bay of Reval (today Tallinn). Together with his wife, Queen Alexandra, he joined the Russian Imperial Family on board the Russian yacht Polar Star, which was crowded with guests. On board Nicholas greeted the British King by saying, “It is with feelings of the deepest satisfaction and pleasure that I welcome your Majesty and her Majesty the Queen to Russian waters. I trust that this meeting, while strengthening the many and strong ties which unite our Houses, will have the happy results of drawing our countries closer together, and of promoting and maintaining the peace of the world.”

The friendly relationship had been severely strained just two years prior to the historical meeting between uncle and nephew. The visit was planned to take place in 1906, but was canceled after the Dogger Bank incident, which almost led to a war between Russian and Britain. It occurred in October 1904, when a Russian Navy fleet attacked several British fishing boats, killing three British sailors, having mistaken them for enemy vessels due to severe fog conditions. The incident caused a serious diplomatic conflict between Russia and Britain, but was settled after Russia paid a large compensation to the surviving fishermen.

The arrival of Edward VII to Russia was considered as a necessary royal confirmation of the recently negotiated Anglo-Russian Entente in 1907. In this pact, Britain and Russia settled their colonial disputes in Persia, Afghanistan and Tibet. This agreement brought the Triple Entente into existence, an important alignment of Great Britain, France and Russia in World War One, which would start within four years of Edward’s death.