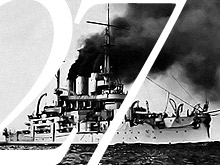 On June 27, 1905 a protest erupted onboard the Russian battleship Potemkin. It became one of the most dramatic events of the 1905 Russian Revolution. For eleven days sailors of the Black Sea Fleet held control of the battleship supporting the revolution and striking fear in the Tsarist government.

The defeat in the Russo-Japanese War (1904-1905) and the political unrest through the Russian Empire all led to mass revolutionary activities in the Imperial army and the navy. Sailors’ morale was low and they were oppressed by harsh disciplinary measures and severe service conditions. Groups were being formed inside the Black Sea Fleet dedicated to the revolution and planning for a fleet-wide mutiny.

The rebellion aboard Potemkin broke out unexpectedly and prematurely. The men on the ship were provoked by the mindless conduct of several senior officers. Sailors were served rotten meat for lunch and when they protested, one of the executive officers, beside himself with fury, shot one of the sailors. At this several other men grabbed the commander and threw him overboard. Other members of the crew quickly joined the brawl, killing other officers. Shortly the crew of more than 700 members seized control over the biggest battleship in the Black Sea and set sail for Odessa, flying a red flag.

The reasons for the mutiny were explained by the Potemkin sailors themselves in a radio message: “To all civilized citizens and to the working people! The crimes of the autocratic government have exhausted all patience… The government wants to drown the country in blood, forgetting that the troops consist of sons of the oppressed people. The crew of the Potemkin has taken the first decisive step… All free men and all workers will be on our side in the struggle for liberty and peace. Down with the autocracy! Long live the constituent assembly!”

The uprising aboard the Potemkin was not an isolated incident. In many cities across Southern Russia, workers were coming out on strike and tension was building in the villages. In the city of Odessa, demonstrations and strikes were a daily occurrence for about two weeks.

When the Potemkin arrived in Odessa, the events quickly worsened on the night of June 29. In a violent clash between demonstrators and government troops, the harbor city was burned and nearly a thousand people died. Alarmed by these events and by rumors about the likely spread of the mutiny Tsar Nicholas II directed reinforcements to Odessa in order to suppress the disorder. The army arrived and shortly the troops began to shoot indiscriminately into the crowd. The shooting lasted several hours and it was reported nearly two thousand people were seriously injured.

In the meantime, the Potemkin set out to sea, hoping to spark mutinies on other ships. In response Nicholas II sent five battleships, one armored cruiser and seven torpedo boats to force the Potemkin to surrender; the captains were ordered to sink it if the crew refused. But when the Potemkin turned down the offer, sailors of the squadron refused to shoot at the mutinous ship. Afraid of their own ships joining the mutiny the commanding officers sailed their ships back to the harbor.

The Potemkin sailed toward the Romanian Port of Constanţa in search for supplies and fresh water. The Romanian authorities turned down the request and the situation for the sailors got critical. They resorted to feeding the engine boiler with seawater, which led to its breakage.

On July 8 the crew of the Potemkin handed the ship over to Romanian authorities, who later returned the battleship to the Russian navy. The crewmen declared themselves political refugees. A share of Potemkin sailors returned to Russia, where they were arrested and trialed. Many went back to Russia only after the February Revolution (1917).

Although the mutiny did not end in victory, Vladimir Lenin saw it as an important event that would influence the success of the 1917 Russian Revolution in destroying Tsarist Russia forever. He later characterized the uprising by saying “The Battleship Potemkin is the undefeated territory of the revolution…what we have is the doubtless and the most remarkable fact: the first attempt at creating the nucleus of a revolutionary army.”

In October 1905 the Potemkin was renamed “Panteleymon” by the Tsar government, but after the February Revolution it was given a new name “Borets za Svobodu” (Freedom Fighter). The story of the uprising became the basis for Sergei Eisenstein’s silent film “The Battleship Potemkin” (1925). It has been called one of the most influential propaganda films of all time. At the World’s Fair at Brussels, Belgium in 1958 it was awarded the greatest film of all time and recognized as a world cinema classic.