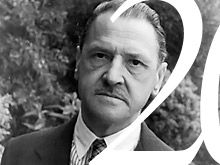 On June 20, 1917, a British Secret Agent - though better recognized as the outstanding writer, Somerset Maugham - was assigned on a mission in Russia. The mission: to prevent the socialist revolution.

On the personal order of Sir William Wiseman, Head of the British Secret Intelligence Service, Maugham’s goal was to keep the Provisional Government* in power and encourage Russia’s further participation in WWI, primarily by cracking down on the German pacifist propaganda.

According to declassified data from August to November of 1917, Maugham appeared to be practically the top resident agent in Russia. With an allowance of 21,000 English pounds, an immense sum of money at the time, Maugham was planted in Russia as an American journalist, his true purpose kept secret even from the British Ambassador to Russia.

One of Maugham’s objectives was to secure the support of multiple Czech political organizations, based in Russia and having close ties to British Intelligence. Their total number was estimated at 70 thousand members. The Czech garrisons were stationed in Russia on alert, if need be, to lend military support to counter-revolutionary activity.

Maugham was also expected to set up a wide intelligence and propaganda network in Russia, to encourage unrest and extend Russia’s consumptive mission in WWI. The network was comprised of groups of professionals trained to deliver speeches at workers’ meetings in plants and factories, and to work up disturbances and unsanctioned protests in the military and industrial sectors.

Maugham placed emphasis on the importance of the visual media to better influence the target audiences, but he admitted their futility when created by British or American specialists, suggesting that Russian writers be attracted to write texts. The total cost of these propaganda activities was worth an estimated $500,000 a year.

On October 18, 1917, Maugham was summoned by Aleksandr Kerensky, the Prime Minister in the Provisional Government, with a request to appeal to London for additional help, namely extra armaments, food supplies, and the supportive tone of the English press. Kerensky’s Provisional Government was already suffocating from the looming Bolsheviks. However, by the time he got to the office of Britain’s Prime Minister David Lloyd George, Maugham learnt that Bolsheviks had already taken over the power. Ergo, his mission had failed.

The job was probably always impossible, but Maugham subsequently claimed that, had he been able to get there six months earlier, he might have succeeded.

*Provisional Government - the short-lived administrative body governing Russia immediately after the abdication of Emperor Nicholas II in February 1917. It lasted approximately eight months, and was dissolved after power in Russia was seized by the Bolsheviks during the October Socialist Revolution of 1917.