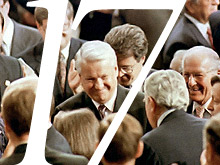 “The idol of Communism, which spread everywhere social strife, animosity, and unparalleled brutality…has collapsed…never to rise again. I assure you, we will not let it rise again in our land.”

These words were spoken by Russian president Boris Yeltsin before a session of the US Congress on June 17, 1992.

Through his time as Russia’s first ever president, Yeltsin was trying to build a partnership with the United States. During his speech he affirmed how that relationship had changed: “For many years, our two nations were the two poles, the two opposites…The world was shaken by the storms of confrontation. It was close to exploding; close to perishing; beyond salvation…That evil scenario is becoming a thing of the past. Reason has begun to triumph over madness. We have left behind the period when America and Russia looked at each other through gun sights, ready to pull the trigger at any time.”

After more than seventy years of the regime, communism seized to exist in Russia when Yeltsin came to power in 1991 and banned the Communist Party that same year. Shortly after the dissolution of the Soviet Union, Yeltsin embarked on a program of radical economic reform, with the aim of restructuring Russia's economic system. He adopted a program of “shock therapy” which involved the sudden deregulation of prices, privatization and a shift to a market economy. This plunged millions of Russians into poverty, and many lost their savings virtually overnight. Faced with the imminent bankruptcy of the government, Yeltsin was compelled to seek financial assistance from the West.

The announcement that communism no longer existed in Russia was met by a standing ovation and Yeltsin won the support of the US, with their financial assistance, in helping to revive the broken down Soviet Union. However, despite the ban placed on the Communist Party, many Russian people still favored its ideology. The modern Communist Party is supported by a significant amount of the population, especially among senior citizens. The Communist Party regularly participates in all elections, including presidential elections.