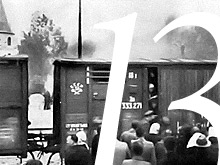 On the night of June 13, 1941, the Soviet Union began their first wave of mass deportations of Estonian citizens. Those who were suspected to be involved with “anti-Soviet” organizations, together with their families, were boarded onto trains and exiled to labor camps in Siberia.

By the order of Joseph Stalin, the deportees were to include: “the members of counter-revolutionary organizations and their families.” People were woken up in the middle of the night and informed that they were to be deported. They were given a short time to pack some personal things and driven to a train station. The men were separated from the women and children, and were placed in separate cars. As they were being loaded onto the trains, husbands and fathers were being seen by their families for the last time.

Very different versions of these events exist and still create a bitter conflict between Russia and Estonia. According to Western historians, on this day nearly 11,000 people from Estonia were deported to Siberia. Estonian politicians call this an act of genocide inflicted by the communist government to wipe out the Estonian people, but Russian historians, who back their report with Soviet documents and records from those years, say that only three thousand people were deported.

Undeniably, the measures taken by the Soviet government were extremely severe and many innocent people suffered because of their tough actions. Many other nationalities in the USSR including Russians suffered from deportation and execution. Mass relocations and deportations were undertaken all throughout Stalin’s rule and was a form of his great purge. Germans, Crimean Tatars, Poles, Chechens, Moldavians and many other nationalities were sent to remote areas in order to eliminate “anti-Soviet” categories of the population and to fulfill Stalin’s plan of collectivization of rural households. Some managed to return home after Stalin's death, but many of them lost their lives in the prison camps, and the exact number of people who were sent away is unknown, disputed still by many historians today.