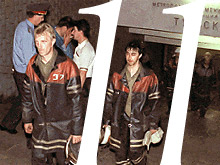 On June 11, 1996, a bomb blast ripped through a Moscow metro train that was travelling between stations Tulskaya and Nagatinskaya. The blast left four people dead and thirteen seriously injured. This was the first explosion in a series of terrorist attacks that plagued Moscow over coming years.

The Moscow metro carries about nine million people each day (in comparison the New York City subway carries only 3 million daily). The explosion happened at about nine o’clock in the evening when the train was at one third of its capacity with about 250 on board at the time.

The explosive device was hidden under the seat of the fifth car of the subway train. When the bomb, packed with 500 grams of TNT went off, the blast was so strong that it even shattered the windows of the adjoining carriages. The driver pressed the brakes, he rushed to the damaged car where he was met by panic and people covered in blood.

One woman recalls her terrifying experience “When I boarded the train, an attractive young man was sitting opposite me, I wanted to sit next to him at first but there was no room. Then the bomb exploded. When I regained consciousness the young man had no legs. Together with some other passengers we tried to lift him onto the seat, but he kept sliding off. He later died.”

Officials launched a terrorism investigation, they suspected it was the work of either anti-government activists trying to disrupt the upcoming presidential elections, or Chechen militants. The investigation team was able to find the makers of the bomb and make several arrests, but no direct evidence was found and nobody was charged for the attack.

On the same date the following month another terrorist attacked shocked Moscow. A bomb exploded in a trolleybus in the very heart of the city. It followed with bombs going off on buses, railway trains and stations. Beginning 1996 up to the terror act by a suicide bomber at the peak of the morning rush on the Moscow metro in 2004, altogether nearly 400 people have been killed and almost 700 injured in attacks on Moscow’s public transport.

Experts called these explosions a “transport war” and acts of “blind” terrorism. In a city where buses and trains are part of everyday life for most, boarding them became terrifying. Strict security measures were put in place by the government and today Moscow’s metro has the most sophisticated surveillance system in the world.