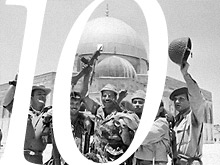 Israeli soldiers celebrate the capture of Old Jerusalem from the Jordanians. June, 1967

On June 10, 1967, after the end of the Six-Day War in the Middle East, the Soviet Union broke off diplomatic relations with Israel. The measure was said to be temporary at first, but it lasted a quarter century, with relations only re-established in 1991.

The Six-Day War was in a sense the third chapter in the on-going Arab-Israeli conflict, mainly instigated – whether in 1967 or any other time - by the Arab rejection of the right of the Jews to reconstitute a national home in the Middle East, and Israel’s resultant security concerns.

The general ill feeling, which fermented the Six-Day War, began as early as 1920, before the actual establishment of the Jewish state in 1948, when Palestinian Arab rioters attacked Jewish communities, triggering attacks by Jewish forces. Another central factor was Egypt’s blockade of the Suez Canal and the Straits of Tiran, impeding shipments destined for Israel between the 1940s and 1950s. The Straits of Tiran – but not the Suez Canal – was reopened to Israeli shipping in 1956 and was secured by the presence of a United Nations Emergency Force stationed in the Sinai between 1956 and 1967.

The war of 1967 stemmed from Egypt's decision to expel United Nations troops from the Sinai Peninsula and block Israel's port of Eilat and was fueled by Arab threats to destroy Israel.

The Soviet Union played a crucial role in arming the Arab states and instigating the Six-Day War. Initially supportive of Israel at the time of its founding, by the early 1950s the USSR’s priorities in the Middle East shifted away from the Zionist state. The Soviets armed both Syria and Egypt, supplying them with modern tanks, aircraft and later missiles. The Egyptian and Syrian armed forces studied in Soviet military academies and largely employed tactics developed by the Soviets.

Although it is not clear whether the Soviets actually desired a war, some historians now believe that the Soviet Union intentionally sparked the war in order to justify a planned heavy bombardment of Israel's nuclear facility in Dimona, but Israel's rapid and overwhelming success, as well as wide international support of its actions undermined the Soviet plan. The Soviet Union’s actions have also been interpreted as another battle in the Cold War. Although the Americans avoided military involvement, they challenged the Egyptian blockade on Israeli shipping in the Straits of Tiran and sponsored a United Nations resolution establishing the presence of the United Nations Emergency Force.

After the defeat of Egypt, Syria and Jordan in 1967, the USSR ruptured diplomatic ties with Israel. This measure was said to be temporary and a consolation for the defeated armies. However, relations were only re-established a quarter of a century later.

This, along with Israel’s victory of the Six-Day War, created a surge of intolerance towards Jews in the USSR. Many Jews left the Communist state and were allowed to resettle in Israel.