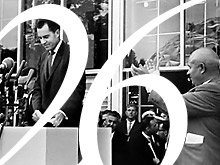 On July 26, 1959, then-US Vice President Richard Nixon was taken for a walk by the Soviet leader Nikita Khrushchev as the former had come to Moscow to host the American exhibition. Touring one of the Moscow embankments, Khrushchev introduced Nixon to the Soviet people, wondering, “What do you say now – do they look like slaves of communism?”

This conversation was a follow-up of the legendary “kitchen debate” at the opening ceremony, when Khrushchev was doing his best to advocate communism to Nixon, “All you need to get a house in the USSR is to be born in the USSR… In America, on the other hand, if you don’t have dollars – you have the choice of either sleeping in a house or on the street. And still, you are saying we are slaves of communism.”

The American exhibition in Moscow was held in response to the Soviet exhibition that took place in New York in the June of 1959. Astonished as they were with the developments of the Soviet technology, the surprise of the Americans was by no means compared to that of the Soviet people when they were exposed to magic appliances, like microwave ovens or dish-washing machines, since only few Soviet people could brag about having a decent TV set.

The open-mouthed surprise on the face of the Soviet visitors annoyed Khrushchev greatly. Known for his short temper, Khrushchev immediately started a heated discussion with Nixon concerning the actual use of the appliances, trying to convince the American vice president the Soviet people didn’t really need all this, “Many things you've shown us are interesting but they are not needed in life. They have no useful purpose. They are merely gadgets.”

Gradually, the conversation strayed to global matters, turning into a debate about communism and capitalism; the scene unwrapped in the middle of the model kitchen “for an average American family” at the exhibition. The discussion that took place there was henceforth referred to as the “kitchen debate", becoming one of the most famous episodes of the Cold War.

A determined advocate of the Soviet lifestyle, Khrushchev sought to defend his points of view. He refused to admit US excellence in the area of the household appliances, “Our country has existed for 42 years, and in seven years we’ll have achieved all America has now. Once we’ve caught up with you, we’ll storm on, and kiss you good-bye!”

As the conversation progressed, Khrushchev unexpectedly passed onto the international affairs and Soviet-American relations, warning Nixon, that “We are giants, too. If you want to threaten us, we’ll respond with another threat.” It was at that moment that Khrushchev promised to show the United States “Kuzkina mat’”, or “Kuzma's mother” in English, introducing the most famous collocation of the Cold War vocabulary, which for years remained an enigmatic and obscure threat for the US and a turmoil for interpreters.

As Viktor Sukhodrev, Khrushchev’s personal interpreter recalls, his colleague was confused and translated the expression as Kuzka's mother as “Kuzma’s mother” throwing off the entire American delegation. Later, the American interpreter having just as hard a time, finally decided to interpret it as “we’ll show you what is what, “ which was close, but still not true. Sukhodrev confessed that Khrushchev did explain what he had in mind, on their trip to Los-Angeles, “…I am starting to translate, when Khrushchev suddenly interrupts me, ‘When I was at the exhibition with Nixon, the translation of this phrase was wrong. And it’s really easy. We will show you something you had never seen before.’ I froze for a moment; no dictionary had such meaning for this expression. In other words, ‘We’ll catch up with you and overtake you, and astound you with something you’d never seen before.’”

Later, as the nuclear program was thriving, the Soviet nuclear physicists named the newly-developed a 100-megaton atomic bomb, the only one in history, and named it “Kuz’kina mat’”. With this new notion, the expression started to make concrete sense.

In the end, Khrushchev and Nixon exchanged promises that their conversation would appear on the Soviet and American television. The "kitchen debate" was front-page news in the United States the next day, while in the Soviet Union, not only did it never made to the television, but had no decent record in any form.