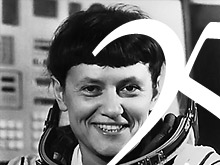 On July 25, 1984, Svetlana Savitskaya of the Soviet Union became the first woman to walk in space. Spending more than three and a half hours in outer space, Savitskaya earned top honors and fame back on Earth.

Savitskaya has been in the public eye long before becoming a cosmonaut. When she was only 18 years old Savitskaya set a world record by sky diving from the stratosphere, experiencing nearly 14 kilometers of free falling. The fearless aviator and a parachutist set 18 world air records and became an aerobatics world champion in 1970. The British press called her then “Miss Sensation.”

By the time Savitskaya was accepted to join cosmonaut training she was an expert test pilot, able to fly more than 20 types of jet aircrafts at speeds of up to 2700 km/h in a Mig-21.

Breaking another record Savitskaya became the second woman in space in 1982 (almost twenty years after Valentina Tereshkova became the first woman to orbit the earth), taking the trip on board the Soyuz T-7, seven months before American Sally Ride. This mission became another example of the ongoing “Space Race” between the US and the Soviet Union where astronautics were always an arena for demonstrating abilities and setting examples during the Cold War.

But Savitskaya is best known for her second flight on the Soyuz T-12 shuttle from which she conducted her space walk on this day. It was also her last trip. After safely returning back to Earth Savitskaya took an executive job at the aerospace design company Energia NPO. She was also elected to the State Duma as a member of the Communist Party in 1989 and presented with the Hero of the Soviet Union title.

“What did you feel in outer space? Is it really as silent and cold, or did you hear unique sounds?” A journalist asked Savitskaya after her successful mission. “Silent? No. It feels like it is alive. Together with Dzhanibekov we took a walk in space not just for fun or recognition. Going into space and taking space walks in it self was really quite an achievement in the early days of cosmonautics. But we conducted serious experiments and were not in the mood to try to catch space sounds if there were really such sounds there.”

The Soviet military department had always argued that outer space was not a place for a female, while others considered it to be the highest proof of equal rights for woman in the Soviet Union. Savitskaya herself sees women in space as an absolute necessity, arguing that a co-ed crew is more effective on long trips, and that there are just some things woman do better than man, like the delicate work of biotechnological research.

When she was asked whether or not she would like to fly another mission, Savitskaya responded by saying: “Another flight into space is not the same as taking another flight to Paris. I have already done everything I can as a cosmonaut.”

Savitskaya retired from the rank of cosmonaut in 1993 and opted for just politics. She remains an active member of the Communist Party to this day.