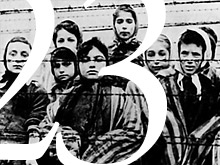 On July 23, 1944, the Soviet Army of the 1st Belarusian Front under the command of Konstantin Rokossovsky liberated the Nazi concentration camp of Majdanek, just outside Lublin, Poland.

In August that same year the Soviet military newspaper “Krasnaya Zvezda” (Red Star) published an article entitled “Extermination Camp” and made known to the whole world the existence of concentration camps and Nazi genocide. The author of the article was the most famous Russian poet and journalist during the years of war - Konstantin Simonov.

Majdanek became a prisoner of war camp in October 1941 and served as a concentration camp from February 1943; its main purpose was to destroy the enemies of the Third Reich and kill the Jews. It occupied 1.7 sq. miles of land and was encircled by two high voltage barbed wire fences and watchtowers. The camp was divided into five sections, including special blocks for women and children. It operated seven gas chambers, two gibbets and a crematorium.

Simonov was the first military correspondent to arrive at Majdanek after the Soviet Red Army entered the camp. He filled his field book with descriptions of what he saw and interviewed surviving inmates. Here is an extract of his writings: “Naked people were placed back-to-back in chambers – an average of 250 people at the same time. The steel door was closed behind them and its edges plastered with clay. Cyclone B poison gas was poured through pipes joining the chambers. After the pipes had been sealed the commanding officer watched the process through an eyehole. Time of suffocation was anywhere from two to ten minutes. The eyehole was inline with the faces of the people standing inside the chambers. They were packed in a way that the dead bodies did not fall, but continued standing.”

It is estimated that up to 500 thousand prisoners of 54 nationalities from 28 countries passed through Majdanek. Nearly 360 thousand of them died mostly as a result of inhumane living conditions – disease, hunger, cold, hard labor, atrophy or beatings from guards. The rest died in gas chambers or mass executions. The largest massacre occurred on 3 November 1943 when in one day nearly 18 thousand Jews were shot dead as part of an operation called Harvest Festival. Jews were executed in huge ditches, while the Nazi Germans played dance music at full volume to silence the shots and cries of the dying.

Today Majdanek is the best-preserved example of what a Nazi concentration camp looked like. The Germans evacuated the camp when news that the Red Army was rapidly approaching reached them. They were unable to destroy the crematorium. Some main sections of the camp can be toured today. They have been turned into a museum memorializing those who died here. Surviving gas chambers and crematoriums act as a reminder of all the 360 thousand victims of Majdanek. A dome construction that stands next to the gas chambers holds a huge pile of ashes from the crematoriums of the camp.