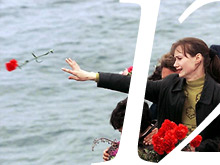 On August 12, 2000, an explosion on board the “Kursk” nuclear submarine during a naval exercise brought the state of the art sub to the bottom of the Barents Sea. None of the 118 crew members on board could be rescued.

The pride of Russian navy, “Kursk” was part of a large-scale naval exercise organized by the newly elected president Vladimir Putin. With matchless power and weaponry features, the Oscar II class vessel was called “the aircraft-carrier killer sub” in the United States. Equipped with high-tech weapons, it carried powerful granite missiles and a rocket torpedo, the Shkval, which was able to travel at 320m/h (10 times faster than any of its Western counterparts).

As the Kursk captain was preparing to fire the torpedo as part of the exercise, an explosion tore through the front of the sub. Minutes later, a second massive blast ripped through the boat tearing an enormous breach and sending the nine-ton vessel plunging to the sea floor.

The brave crew was able to shut down the nuclear reactors, and 23 men managed to scramble to the rear of the vessel where an escape hatch was situated.

In the first days of the accident, authorities revealed little detail to the public, leaving the relatives of the crewmen in a state of turmoil. The entire world watched on with horror, hoping for a successful rescue.

The first attempts to reach the survivors, organized by the Russian navy, failed. Severe storm conditions, strong currents and the damage created by the explosion prevented the rescue vessels from docking with the ship and opening the hatch. When Russia finally accepted foreign help in their rescue efforts, the British and Norwegian deep-sea divers reached the compartment on August 20. They were able to determine that it was flooded, and all hope of rescuing the submariners was lost.

Russian authorities were strongly criticized for originally refusing help from US and British governments, and there has been much debate over how long the sailors might have survived. According to the official report, all the men died from carbon monoxide poisoning not later than eight hours after the explosion. Others suggest that the sailors survived for several days.

Many rumors concerning the cause of the accident surrounded the disaster, but two main theories emerged. Navy experts suspected a collision or the firing of a torpedo at the Kursk by the British or US submarines in the area at the time. Others offered a different explanation – the accidental explosion of the faulty torpedo warhead – which eventually became the official version.

A renowned French filmmaker Jean-Michel Carré in his documentary “Kursk: A Submarine in Troubled Waters” supports the theory of attributing the sinking to a torpedo strike from a foreign sub with overwhelming evidence. According to Carré, as the Kursk was performing the military exercise, it was being observed by two US submarines on duty - the Memphis and the Toledo. At some point, the Kursk and the Toledo collided (video of the salvaged Kursk shows a defined rapture which was not likely to have been caused by the internal explosion) and in order to discourage the Kursk from pursuing it, the Memphis fired a torpedo into the Russian submarine. Carré claims that President Putin intentionally concealed the truth about what really happened on this day, in order to prevent a conflict with the United States.

The Kursk was lifted from the seabed in June 2002. The bodies of its dead crew were removed and buried in Russia. All the submariners were awarded the Order of Courage, and the title Hero of the Russian Federation was given to the ship’s captain, Gennady Lyachin.