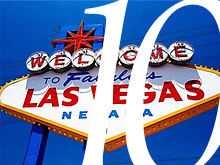 Among all the unusual weddings, ranging from spontaneous Las Vegas nuptials to themed ceremonies, the wedding of Yury Malenchenko and Ekaterina Dmitriyeva on August 10, 2003, tops the list. The happy couple became the first ever bride and groom to get hitched in space.

Russian cosmonaut Malenchenko was on board the orbiting International Space Station and his American Russian-born fiancée, some 400 kilometers away, was in Houston, Texas. The lovebirds said their vows via a video linkup and blew each other kisses. “That was great and very touching” said Ekaterina, standing next to a life size cardboard figure of her husband, specially prepared for her as a photo opportunity.

Malenchenko, together with his best-man American Edward Lu, had everything planned. Earlier that year they had the ring and a bow tie delivered to him in a “Progress” cargo ship along with the regular supplies. In the mean time, Ekaterina obtained approval from Texan authorities, whose law permits a wedding to be staged even if only one party is present. That is, of course, if the other has a legitimate reason to be absent during the ceremony. As it turned out, being on a space mission was accepted as a reasonable excuse.

Ekaterina Dmitriyeva, a 26-year-old US citizen, was born in the Soviet Union but left for the United States when she was four together with her parents. She lives in Houston where she first met Yury in a night club during the anniversary of Yury Gagarin as the first man in space. The newly married couple originally did not exactly plan to say their “I dos” in this unusual way, everything, as they say, turned out by accident.

Yury, who has previously been married once, proposed to Ekaterina in December the previous year. The wedding was planned to take place in August when Yury was to return from space. However the space program changed plans and his expedition was extended to October. In spite of this the couple announced that they will still get married on the set date.

NASA supported their initiative and organized video conferencing for the ceremony, but the event was not without controversy. The Russian space agency was skeptic about the idea at first, saying it violated military discipline. Unable to convince Yury to postpone the wedding, they eventually agreed. The groom’s parents were also not best pleased, and made the couple promise to stage a proper earthbound weeding for relatives to attend on his return.