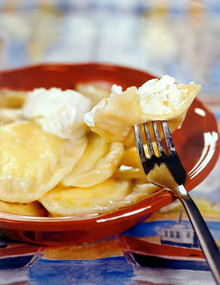 This is another typical Eastern European dish. It is not exactly Russian, as vareniki are believed to have originated in Ukraine. But Russians still often serve these dumplings at their tables and consider them to be their own.

An ordinary person, not a gourmet, would hardly find much difference between the vareniki and the famous Russian dumplings, pelmeni. However, there are several significant differences. First and foremost is that while pelmeni have a rather limited range of ingredients – mostly beef, pork or fish – vareniki can be stuffed with just about any ingredient you can think of.

So different and so delicious

The most popular vareniki are those with potatoes, cabbage, beef or cherries (the latter is usually served as a dessert), but wild berries, fish, cheese, mushrooms, blueberries and farmer’s cheese are nonetheless popular and tasty fillings.

Yet another difference is that pelmeni are usually made with raw beef, but beef vareniki use boiled meat. Also, vareniki are usually a bit bigger and have a crescent shape unlike the round pelmeni.

Ukrainians have somewhat of a gourmet obsession with vareniki and every year reports of another world’s biggest varenik come from this country. The latest gigantic dumpling to compete for the planet’s biggest title was made in a village close to the capital Kiev.


The huge varenik weighed in at almost one hundred kilograms.

While we do not recommend trying cooking such huge dumpling at home, we certainly suggest trying this classic recipe for vareniki. It calls for farmer’s cheese, but you can use any other ingredient of your choice in the right proportion. 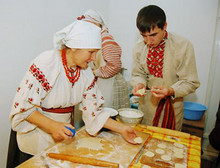 Stuffing: Mix cheese, egg yolk and sugar. Roll out pastry. Cut circles from pastry (around 5-7 cm in diameter). Place the stuffing on the circle (about 1 teaspoon). Stick edges together. Put the vareniki in boiling water and boil for around 10-12 minutes, stirring occasionally with a tablespoon (do not to let the vareniki stick together).

When making vareniki with mashed potatoes, for a genuine Ukrainian taste top with a traditional dressing of fried onions and bacon.