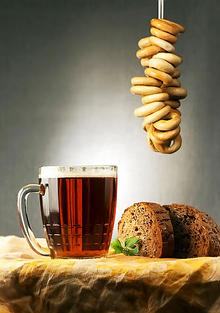 A fizzy bread drink sometimes referred to as Russian cola, kvas literally means “leaven.” Its origins go back fifty centuries (fifty is not a typo!) to the beginnings of beer production. Kvas was first mentioned in Old Russian Chronicles in the year 989. But how the recipe was discovered and by whom remains a mystery to this day.

Some say the drink was invented by mistake. According to one legend, a bag of grain got wet and the grain started to grow. A farmer decided to save the product and make flour out of it. He couldn’t use it to make bread and instead, invented malt. He added some water, let the liquid ferment and created the first ever kvas.

While the production process is similar to beer making, kvas has very low alcohol content (0.05 - 1.44%) and it is considered a non-alcoholic drink. The main ingredient of true kvas is  rye bread, and the drink can contain unfiltered yeast in it. Kvas has a high content of vitamin B, it is considered to be a good appetizer and healthy source of energy. The drink is recommended for sportsmen who are trying to increase their muscle weight. In 1913 Russian bacteriologists proved that kvas is a germicide by showing that typhus bacteria die in the drink.

Kvas has been consumed in most Slavic countries (Russia, Belarus, Ukraine, Lithuania, Poland) as well as in ex-Soviet states since ancient times. In some countries one can still see kvas vendors on the streets. Similar beverages around the world include Malta, Chicha, Ibwatu, Pulque and Rivella. There is a famous saying "Bad kvas is better than good water."

House kvas is made with black or rye bread baked into sukhari (croutons), yeast and zakvaska (kvas fermentation starter). The taste depends on the proportions of these essential ingredients. There are numerous variations of the following basic recipe.

In Russia kvas is used in some cold soup recipes such as okroshka, an ancient Russian dish made with vegetables and cold boiled meat and/or fish (in proportions one to one).

Commercial kvas is occasionally mixed with other soft drinks, carbonated water and flavorings. After the collapse of the Soviet Union, Western soft drinks such as Coca-Cola and Pepsi decreased the demand for commercial kvas in Russia. But today the drink is back on the market and is on the rise once again. The Russian company Nikola (in Russian the name sounds like “not cola”) has promoted its brand of kvas with an advertising campaign emphasizing "anti cola-nisation."

However in 2008 Coca-Cola itself started producing bottled kvas for the Russian market under the labels “Kruzhka” and “Bochka” (which literally mean Mug and Barrel).

At an international soft drink contest held in Yugoslavia in 1975, Russian kvas received 18 points while another well-known drink, Coca-Cola, received only 9.8 points.