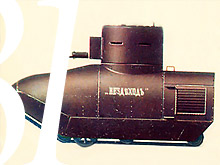 On May 31, 1915 the first ever tank – nick-named “Vezdekhod” – to be constructed not only in the Imperial Russia, but also in the entire world, was tested. Vezdekhod, which in Russian means “all-terrain vehicle”, was designed by 23-year-old Russian aviation engineer Aleksandr Porokhovshchikov. It did not, however, progress further than a pre-production model, due to problems in the design.

The idea of the tank responded to a demand for a strong complex vehicle with cross-country capabilities. Porokhovshchikov came up with the tank idea while watching military trainings, “Looking at the soldiers running in chains, I thought: what a desperate venture it is to rush into the heat of the attack under gunfire. What if the trenches were protected not by people, defenseless against this lead shower, but by an armored car, with a full arsenal onboard…I saw the solution in placing a frame on a caterpillar tread.”

The tank’s major feature, the caterpillar, was originally invented by Volga Region peasant Fyodor Blinov, who in 1878 patented the “carriage with track for cargo transportations both on the firm ground and broken terrain.” This structure later gave birth to the original tracked gear.

The construction, started in February of 1915, was located in the shops of the Nizhny Novgorod infantry division stationed in Riga and undertaken by a group of military engineers and workers. Though in need of a major tune-up, the first tank still had several unique features, and was a breakthrough in the military industry. It possessed all the features typical for all classical tanks of subsequent generations.

Porokhovshchikov’s Vezdekhod had a welded frame with an armor of 0.31 inches, which ran on a single wide track made from rubberized fabric stretched over four drums. Two small wheels were placed on the sides of the track, which could be lowered and controlled by a steering wheel. The machine was powered by a 10 hp petrol engine and had a cannon on the revolving tower. According to Porokhovshchikov’s design, the Vezdekhod could use the back drum and its wheels on firm ground and lie down the track on broken terrain. The large slope angle of the armor made it more bulletproof. The armor itself was made of several layers of steel with lining of hair and dry seaweed and was resistant to machine-gun bursts.

In cross-country trials the Vezdekhod was reported to be capable of reaching 26.5 mph – a speed never before achieved by either the English or the French tanks – at the weight of four tons with a two-man crew. On firm ground the tank felt relatively comfortable, with the fastest speed record of 40 mph. The heavy armor made it impossible to steer using the wheels. In addition the tank was helpless on soft snow.

Regardless of the shortcomings, the test commission report said, “Overall, Vezdekhod crosses terrain and obstacles impassable to conventional motor vehicles.”