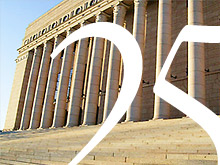 Eduskuntatalo, the main building of the Parliament of Finland

On May 25, 1907, the first parliamentary session opened, attended by women. Finland, part of the Russian Empire at the time, became the first country in the world to not only grant women the right to vote, but also the right to be elected. After the 1907 elections, out of 200 deputes, 19 were women, which constituted 9% of the parliament. Before, women in New Zealand were the only ones to receive the right to vote.

The revolutionary events of 1905 in the Russian Empire triggered a wave of political reforms in Finland, the parliamentary reform becoming a breakthrough in the political life of Finland itself, and the rest of the world on the whole. Suffrage was granted to all adults regardless of their gender and social status. 85% of men who had never before had the right to vote now got this chance, together with all eligible women, who also enjoyed this right for the first time in the country’s history.

The total number of candidates equaled 762, among whom 62 were women, including famous trade union enthusiasts, scientists, and writers. Most of them represented social democratic and bourgeois parties. The elections were a great success, the turnout was high, and all the rules observed. These elections gave rise to the development of the women’s movement in Europe. Unfortunately, up to the start of the World War II, Finnish women never managed to top their percentage record in the parliament.

The reason for such strong democratic tendencies in Finland was its subordinate position in relation to the Russian Empire.

A subject to the Russian Empire on paper, throughout the 19th century, Finland still retained autonomy to a large degree. It had a Constitution of its own, as well as its own legislature and a Parliament. The Senate was the major governing body, only headed by a Russian Governor-General on a pro forma basis.

At the turn of the twentieth century, the country had to withstand a real struggle for its independence. At the peak of Finland’ s “rusification” the power of the Finnish Parliament was limited, all publications were subjected to censorship, and the Russian language was generally imposed as the official language of the country. Every progressive thought was ruthlessly repressed.

Finland was granted independence from Soviet Russia in 1917 shortly after October Revolution. Since then, it’s been known for its strong social programs and high living standards. The gender equality has become the cornerstone of its national policy.