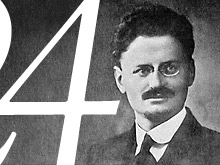 On May 24, 1940, a group of armed men disguised as police officers stormed the house of Leon Trotsky in Mexico, firing over 200 bullets, though they failed to assassinate the Russian revolutionist.

Trotsky narrowly escaped death by hiding under the bed. He gave his own description of that night in an article he wrote few weeks later: “The attack came at dawn, about 4am. I was fast asleep, having taken a sleeping drug after a hard day’s work. Awakened by the rattle of gun fire but feeling very hazy, I first imagined that a national holiday was being celebrated with fireworks outside our walls. But the explosions were too close, right here within the room, next to me and overhead. The odor of gunpowder became more acrid, more penetrating. Clearly, what we had always expected was now happening: we were under attack...The shots came from all sides; it was difficult to tell just from where. At a certain time my wife, as she later told me, was able clearly to distinguish spurts of fire from a gun: consequently, the shooting was being done right here in the room although we could not see anybody. My impression is that altogether some two hundred shots were fired, of which about one hundred fell right here, near us. Splinters of glass from windowpanes and chips from walls flew in all directions…”

The leading man in the 1917 Russian Revolution and the Bolshevik seizure of power, Trotsky was the architect of the Red Army and a powerful war commissioner. For Trotsky, it only seemed natural that he would take over after the death of Vladimir Lenin, but the fight for power and influence among the Bolshevik leaders was bitter, and eventually the majority of party members sided with Joseph Stalin who eventually became the communist leader. Trotsky emerged as a scathing critic of Soviet leadership, and was exiled - first internally, then abroad in 1929. He wandered from country to country, going from Turkey, to France and Norway, before settling in Mexico in 1936, as he continued diligently to write incriminating articles against Stalin.

In the meantime, the Soviet secret service kept a watchful eye on Trotsky, having agents among his associates, when finally Stalin gave an order to kill his old standing enemy. The unsuccessful attempt on Trotsky’s life on this day was headed by the famous Mexican painter David Siqueiros, supposedly hired by Stalin. Although Trotsky miraculously survived that attempt, there followed another on August 20 that same year - and this one was successful. Trotsky was struck on the head with an ice-pick by NKVD agent Ramon Mercader and died in the hospital the following day.