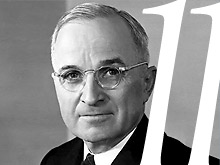 On May 11, 1945, the new American President, Harry Truman, suddenly suspended Lend-Lease aid to the Soviet Union. This sudden violation of the policy to uphold the post-war cooperation with the Soviet Union, pursued by former US President Franklin Roosevelt since its ratification in March of 1941, triggered a certain reaction from Joseph Stalin.

Since the San-Francisco conference on UN principles and the end of the war in Japan, and the post-war summit of the three powers were jeopardized by such a predicament, Harry Hopkins, the President's right hand and on of the originators of the Lend-Lease Aid program, was sent to Moscow to convince Soviet authorities that the US position on the Lend-Lease policy remained unchanged.

This decision caused Harry Truman and his administration a short, but very bitter dispute with the Soviet Union. Since the decree had been proposed by Winston Churchill and agreed upon by the three parties, the United States had provided over $50 billion in military, industrial equipment, and food supplies to the Allies. From 1943 onward, however, political circles, businesses, and the armed services, - in other words, everyone concerned about taxes and foreign trade, yearned for cutbacks in Lend-Lease supplies. Beginning in 1944, only the Soviet Union was provided unconditional aid, and during March and early April 1945, under the presidency of the newly sworn-in Harry Truman, Congress renewed the Lend-Lease treaty, while prohibiting its use for post-war reconstruction.

The fears that the use of Lend-Lease for post-war reconstruction would "open ourselves to a lot of trouble" and had bothered Truman, despite the fact that his counselors repeatedly pointed out that the aid could serve as a perfect lever in post-war world reconstruction. So on the night of May 11, three days after the German surrender, Truman abruptly ordered the termination of Lend-Lease aid to the USSR; he further authorized restricting Lend-Lease to materials still under contract and aimed at completing industrial plans or necessary for Far-Eastern operations.

"The storm broke out at once," Truman recalled. Two weeks later Stalin replied in like terms to envoy Harry Hopkins. Protesting the suspension of Lend-Lease, Stalin labeled the manner of cutbacks "unfortunate and even brutal", a "scornful and abrupt" termination of an agreement between two governments. Stalin asserted that the Russians had based their economic plans on Land-Lease; that it was the surprise termination that had been so infuriating; that they regretted not being able to express their gratitude. Hopkins, however, assured him of American goodwill and promised restoration of the decree.

However, the Land-Lease Aid decree only survived until August of 1945.