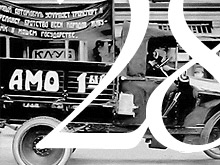 On June 28, 1918, the Moscow Automobile Society, Russia’s oldest car factory, became state property. Established in 1916 by the entrepreneurial Ryabushinskys brothers, it became a Soviet car-making giant and a symbol of Soviet industry.

The newly-built plant attracted the crème de la crème of the Russian engineering elite. The director was offered an annual salary of 40,000 rubles, about nine times more than a general’s salary. Workers were drawn to AMO by high salaries, exemption from military service and an apartment building rented for non-locals; big families were even offered separate cottages.

The first car models relied heavily on foreign blueprints, particularly those purchased by the Ryabushinsky brothers from the Italian company Fiat. The first Soviet trucks were the very image of their Italian prototypes, only painted in the revolutionary color of red. The total number of the trucks produced in 1917-1919 numbered 150. These trucks became the precursors of the next generation of Soviet trucks, many of which proved their worth during World War II.

The most remarkable creation of AMO, which in 1931 was renamed the Stalin Car Factory, or ZIS, was the first Soviet luxury car. The decision to go ahead with the Soviet-made limousine came in 1943. Until then Soviet leaders, including Stalin, had used foreign cars for official business, and at the height of World War II such reliance on foreign companies seemed inappropriate.

The idea of a Soviet limousine had crossed the minds of Soviet officials as early as the 1930s, but the first make, produced by the Putilov factory, was rejected by Stalin and the factory itself was later transformed into a tractor plant. It was ZIS which laid the foundation for Soviet luxury cars with its ZIS-101 model.

An even more luxurious version of the ZIS-101, the bulletproof eight-seater ZIS-115, was designed in 1946-1947 and totaled 32 units, three of which were customized for Stalin’s personal use.

Stalin’s limousine weighed almost 7 tons because of the outer steel shell and bulletproof, 220lb, 3-inches thick windows; its top speed exceeded 75mph, but it was very fuel-consuming. The windows could only be operated with the help of a special hydraulic axle jack. Together with the regular locks, the doors were supplied with chains, to prevent passengers from falling out of the car.

The government-order model car did not have a partition between the driver and the passenger. As Stalin explained, he had “no secrets from his people, therefore the partition was unnecessary.” This car could not function on any of the existing class of gasoline, so a new type had to be produced. The steel for the armor was tested at the firing range. The assembling process was undertaken in a specialized shop floor with a limited access.

Very suspicious and in constant fear of an attacks, Stalin never used the same car twice in a row and constantly had the license plates changed. None of the drivers from the Kremlin garage knew which of his three cars he would choose from, so all three of had to wait alongside their car, not knowing where they would be driving to.

The pioneer of the Soviet automobile industry, however, fell into significant decline by the end of the century, and in the wake of the recent global financial crisis has found itself in an even larger predicament. In February 2009 the work week at the factory was reduced to three days, the work force itself was reduced, and production of a number of models has been suspended or delayed.