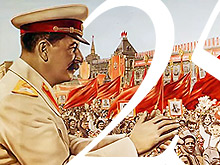 On June 25, 1945, at a reception in the Kremlin on the occasion of the victory in World War II when Nazi Germany was defeated on May 9, Joseph Stalin raised a toast calling the “common, ordinary, modest” Soviet people the “screws of the great state mechanism”.

Shortly after this a group of young students held, in its own way, a demonstration. They walked down the corridors of their university (the Central Aerohydrodynamic Institute) singing “We are screws, we are bolts”. The demonstration ended without consequence since it more or less corresponded to their field of study. But during Perestroika, Soviet newspapers used Stalin’s word “screws” to illustrate his totalitarian regime by saying “millions of ordinary soldiers and officers were just ‘screws’ to the generalissimo,” and that he offended the victorious nation that had sacrificed everything in a war that took the lives of almost 27 million Soviet people.

The reception at the Kremlin that was held on this day in 1945 was organized in honor of those who fought in WWII (known as the Great Patriotic War in Russia). Many toasts were proposed to Stalin, to the frontline commanders and their armies, to the commanders of the Soviet artillery, to the health of Mikhail Kalinin (Chairman of the Presidium of the Supreme Soviet of the USSSR) and other high ranked officials.

At the end of the reception Stalin stood up to say the following toast which he was later so criticized for:

“I would like to drink to the people who are considered screws of the great state mechanism, but without whom we, the marshals and commanders of fronts and armies, are not worth a darn. Some screw is out of order – and all is finished. I raise a toast to people who are common, ordinary, and modest – for screws that keep our large state mechanism in a state of readiness in all areas of science, economics and the military. These are modest people. Nobody writes anything about them, they don’t have titles or great ranks, but they are the people who hold us up, as the base holds up the peak. I drink to the heath of these people, to our respected comrades.”