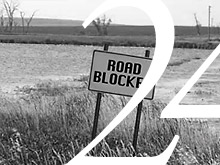 On June 24, 1948, the Soviet Union blocked the roads and railroad lines into West Berlin, initiating the 324-day blockade – the first open confrontation between the Soviet Union and the United States – opening a series of bitter conflicts of what became to be known as the Cold War.

The Soviets demanded reparations from Germany in the form of money, equipment, and natural resources and saw Germany as a neutral and disarmed state. The United States intended to lend vast material assistance to boost Germany’s rebirth as a strong and militarized state, capable of withstanding the imminent Soviet expansion to the West.

The pretext for the blockade was the money reform undertaken collaboratively by the United States, Great Britain and France in the their western zone of influence, as they introduced a new German currency on June 21, 1948, forcing the entire mass of the Reich’s old deutschmarks into the Eastern “Soviet” part, jeopardizing the already volatile Eastern economy. In response, the Soviet zone introduced its own East German currency. In addition, the Soviet Union exploited the fact that its exact obligations on providing the transportation network from Berlin westwards were not agreed upon, so it went ahead with the blockade.

After several days of panic and uncertainty on the Western side, a massive airlift of supplies was undertaken to West Berlin. Throughout the year, 278,228 flights to West Berlin by the American and British air cargo fleet delivered 2,326,406 tons of supplies, without any intervention on the part of the Soviet Air Force.

Not only were the supplies delivered straight onto the air fields, but also via air drops. Most popular were the so-called “raisin bombardments” – the descent of chocolate bars, candy, raisin muffins (hence the name) and other confectionary, tied to handkerchiefs, acting as little parachutes.

Regardless of extensive propaganda, historians agree that the supply through air alone would have never sufficed to provide for West Berlin. Food and fuel were channeled to the blockaded territory through a well-functioning vast black market network, established back in the years of the war. The Berlin wall was not yet erected – therefore, no physical obstacle could cut off access to the Western part completely, thus rendering the blockade ineffective, a fact obvious both to the Soviets and the Americans.

The blockade was officially lifted on May 12, 1949, spurring the establishment of the new state, the Federal Republic of Germany, with a new Constitution introduced, but the socialist and the capitalist states were still decades away from reaching a consensus.