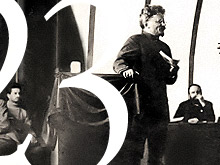 On June 23, 1921 during the third congress of the Comintern, Leon Trotsky declared “Now, for the first time, we see and feel that we are not so immediately near to the goal, to the conquest of power, to world revolution. At that time, in 1919, we said to ourselves, 'It is a question of months.' Now we say 'It is perhaps a question of years.'"

Leon Trotsky, a principal leader of the 1917 Russian Revolution, created a theory of ''permanent revolution'' that he expected would result in world domination. Trotsky supported Vladimir Lenin’s theories, who believed it was impossible to build socialism in one country, as socialism required a massive increase in production to satisfy the needs of society, which would only be possible by merging resources internationally. Therefore the revolution was to spread to other countries in order to defeat capitalism.


By bringing together Marxists from different countries and promoting world revolution, Trotsky and Vladimir Lenin co-founded the Third International - also known as the Communist International, or Comintern, in 1919. The aim of the organization was to fight "by all available means, including armed force, for the overthrow of the international bourgeoisie and for the creation of an international Soviet republic as a transitional stage to the complete abolition of the State".

The realization that world revolution was not imminent led to new Comintern policies. Joseph Stalin began promoting his “Socialism in one Country” political theory. It rejected the Soviet Union’s dependence on foreign assistance in the building of socialism and advocated establishing power in Russia first by building up the industrial base and military might of the Soviet Union before exporting revolution abroad. This idea was vigorously criticized by Trotsky, who believed in world revolution and aggressively fomenting revolution in countries all over the world.

After the death of Vladimir Lenin in 1924, Trotsky’s position within the communist party began to weaken. He constantly attacked the party leadership with rage and eventually lost the fight for power when the majority of party members sided with Stalin. Trotsky continued to be a scathing critic of Soviet leadership and was expelled from the Party, sent to Siberia, and later banished from the Soviet Union.