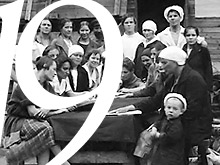 Likbez class: adults and children side by side (image from www.mdf.ru)

On June 19, 1920, Sovnarkom of RSFSR established the All Russian Extraordinary Commission for the Liquidation of Illiteracy.

The Soviet system had inherited economic and cultural deficiency from tsarist Russia. Before the revolution, approximately 70% of the population could not read or write. Vladimir Lenin considered this problem among his top priorities to address. The commission was formed to carry out the decree signed by Lenin, “on the eradication of illiteracy among the population of RSFSR” in 1919 (otherwise known as Likbez), and was designed to manage the education of people unable to read or write. According to this decree, all people aged from 8 to 50 years old were required by law to become literate in Russian or their native language.

A huge social propaganda campaign was launched by Likbez. Posters with slogans like “An illiterate man is a blind man. Misfortune and Unhappiness awaits him everywhere” were seen everywhere. A huge amount of the effort to eliminate illiteracy was aimed at women. At the time of the Russian Revolution 14 of the 17 million illiterates in the country were women.

The organization gradually built an impressive administrative structure that became involved in all aspects of literary work. They ordered the printing and distribution of textbooks and bought paper and pencils from abroad, using the government’s precious foreign currency. Teachers were provided with food, clothing and shoes; special schools were established for peasants, soldiers and national minorities.

In Lenin’s New Economic Policy (NEP) declaration, he identified the main functions of the Political Education Department and listed the three “enemies of communism”, one of which was illiteracy (other two being Communist Conceit and Bribery). It reads “As regards the second enemy, illiteracy, I can say that so long as there is such a thing as illiteracy in our country, it is too much to talk about political education. This is not a political problem; it is a condition without which it is useless talking about politics. An illiterate person stands outside of politics. He must first learn his ABC. Without that there can be no politics; without that there are rumors, gossip, fairy-tales and prejudices, but not politics.”

The education system that was built by Lenin is considered by many to be the best aspect of his rule. Every Russian person growing up in the Soviet time can remember Lenin’s quote displayed in every classroom “Learn, learn and once again, learn!” Everybody aimed at having a good education; it was seen as prestigious and gave you social status. Students were expected to excel in all areas, from reading to weapons engineering and cultural studies.

According to the census, by 1939 the literacy rate had risen to 87.4%. Today’s Russian education system is almost unchanged from the times of the Soviet Union and has a literacy rate of a near-perfect 99.4%.