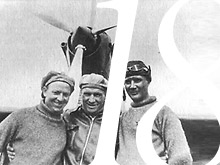 They successfully ended it at Pearson Airfield in Vancouver, Washington State on June 20.

The single-engine ANT-25 was constructed by Andrey Tupolev, the outstanding Soviet aircraft designer, in 1934, and had by that time set a record for the longest distance flight, covering 7,712 miles in 75 hours.


The first attempt to perform the transpolar flight was made on August 3, 1935 by pilots Sigizmund Levanevsky, Georgy Baidukov, and Anatoly Levchenko, but it was not completed due to a massive fuel leak. Having reached the ground, the plane nearly burst into flames ignited by a little spark. Adding to all the troubles was rescuing $9,000, which the People’s Commissar of Defense, Kliment Voroshilov, had given to the crew, saying, “Once you land there – you guys have some fun.”

The ANT-25 flight, relatively uneventful for the first 24 hours, later proved to be a feat of strength and endurance for the three experienced cold-weather pilots. As they were approaching the Polar Region, the aircraft’s magnetic compass became inoperable. Navigation from then on relied solely on dead reckoning and a solar heading indicator. To make matters worse, headwinds and storms slowed the ANT-25’s progress and consumed fuel at an alarming rate. These impediments threatened the crew’s already scarce oxygen supplies. The plane was under constant danger of icing, since only the plane’s propeller was capable of de-icing. At one point in the flight even the engine coolant was about to freeze up. The crew quickly thought to put their drinking water supply to use, only to discover that it, too, was frozen.

After a 63-hour flight, covering a total distance of 5,288 miles, the plane landed at Vancouver’s Pearson Airfield, with a mere eleven gallons of fuel left in the tanks. Chkalov was the first one to exit the plane, yelling, “Guys! Look, General Marshall is waiting for us!” Baidukov, still inside the cockpit, was wondering who exactly was waiting for them – a general or a marshal, misled by the last name of General George C. Marshall, America’s future Army Chief of Staff. Besides, the Soviet aviator was unaware that the rank of marshal simply didn’t exist in the United States.

The hero pilots were surprised at the crowds of cheering spectators anxious to see them. The warm reception at the airfield was just a prelude to a meticulously-planned, month-long tour of the United States that lay ahead of the Soviet aviators. Instant stars, they were praised by the American press. Wherever they went they were greeted with an artillery salute, local beauty queens placed laurels on their heads, and celebs lined up for an autograph.

The festivities reached their height with a specially-organized parade in New York City and a visit with US President Franklin Delano Roosevelt. While at the White House, Chkalov was attracted by many of the paintings on the walls. Roosevelt explained it was during his maritime past that he’d developed a love for the naval theme. To that, Chkalov remarked simply, “Your collection would look a lot better with our Aivazovsky in it.” A brightened up Roosevelt then admitted, “I really do love Aivazovsky a lot…”

Sadly, Chkalov died a year-and-a-half after the flight while test flying a new fighter aircraft, but the daring record of the Soviet aviators was commemorated in 1975 with the erection of a large monument at the Pearson Airfield in Vancouver, Washington.