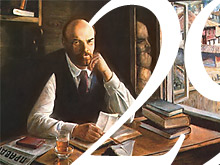 On July 29, 1900, Vladimir Lenin left Russia to go abroad. Although briefly returning to St. Petersburg following the outbreak of revolution in 1905, Lenin would spend seventeen years traveling and living throughout Europe while advocating Marxism and creating various propaganda tools.

With the goal of re-establishing unity among Russian Marxists, which was weakened during his time in exile, Lenin and his wife Nadezhda Krupskaya first travelled to Geneva, Switzerland. Eager to launch a propaganda campaign, Lenin established the first ever Marxist newspaper called “Iskra” (The Spark). Among its editors were prominent figures of the Russian Marxist intelligentsia, such as Georgy Plekhanov, Julius Martov, Leon Trotsky and Vera Zasulich.

The first issue of Iskra was released in Leipzig in December 1900, with the slogan “The spark will kindle a flame”. The newspaper was smuggled into Russia and circulated throughout the country by propagandists in streets, businesses, theaters and barracks.

From the beginning, the Iskra group of Marxist theorists faced internal disagreements. These divisions came to the forefront in August 1903 during the second congress of the Russian Social Democratic Labor Party (RSDLP) held in London. The conference was organized by the Iskra group in order to establish the Party policies and unify the revolutionary force of the proletariat.

Together with Plekhanov, Lenin put together a program for the RSDLP which outlined the party’s regulations and immediate objectives. The final goal of this movement was to build a new socialist society by launching a socialist revolution. According to Lenin, the principal formula for accomplishing what they set out to do was “the Minority obeys the Majority.”

The congress saw the Iskra group, as well as the entire RSDLP, divide into two different ideological camps and the terms Bolsheviks (Majorities) and Mensheviks (Minorities) were established, with Lenin claiming the Bolsheviks name for his radical group.

Lenin strongly defended the total rule of the proletariat and the strict demands he set out for party members. He pushed for organizing a small revolutionary front that would lead the mass of the Russian working class towards the revolution. Whereas Martov, who headed the Mensheviks, demanded the creation of a mass-based open Party. Martov lost the deciding vote on party organization despite holding the majority of supporters in the beginning.

During the 1905 Russian Revolution, Lenin illegally traveled to Russia, but returned to Europe shortly afterwards. He continued his activity of pushing for a revolution and issued decrees on policies for the Bolshevik faction of the Party.

Lenin returned to Russia in 1917, after the Tsar’s abdication, when the power was in the hands of the Provisional Government. He was successful in demanding an armed uprising against the government in October that same year and emerged as the head of the new Soviet government.