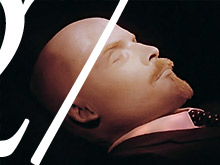 On July 27, 1941, a top secret cargo of national importance arrived from Moscow to the city of Tyumen. The regional committee of the Tyumen region was instructed to keep the unusual object safe throughout the duration of World War Two. They could not even have suspected that inside was the body of Vladimir Lenin in a sarcophagus container.

Not a single Soviet citizen was meant to find out about the evacuation of Lenin’s body from Moscow. The temporary storage of his corpse in Tyumen was officially top secret. After all, Soviet people needed to believe that Lenin was on Red Square, going through the hardships of war together with them. Lenin’s body was transported under close surveillance. All the way from Moscow to Tyumen it was heavily guarded by armed NKVD (People’s Commissariat for Internal Affairs – the precursor of the KGB) police officers.

Lenin’s body was accompanied to Tyumen by a team of scientists, including Ilya Zbarsky and his father, the famous professor Boris Zbarsky, who embalmed the leader’s body 56 days after his death on 21 January 1924. During this long official business trip they had to care for the body and maintain just the right climatological conditions to preserve it. What’s worth mentioning is the fact that it was just the body that left Moscow. Lenin’s brain had been removed and preserved in paraffin, and remained in the capital.

The valuable cargo was transferred to a building of a local school of agriculture in Tyumen. A thick brick fence was constructed around the temporary mausoleum and all windows on the second floor where the mummy laid were piled with stones. The real mausoleum on Moscow’s Red Square was disguised to protect it against Nazi air force as an old two-storey house with a balcony.

According to legend, one day, Ilya Zbarsky walked in to the room to check on the body and his face froze with terror. The leaders’ body was covered in mold. Ilya rushed to get more embalming fluid, but discovered that there was none left. For making new stocks of embalming fluid he needed distilled water. While his colleagues were desperately searching for the special water, Ilya was trying to remove the mold by pouring boiling water over the corpse, but that did not seem to work. The distilled water arrived the same day via a plane from the city of Omsk and everything was worked out.

The body was back to its original resting place in March 1945 without anyone discovering that it had been in absentia for almost four years. It was only after the fall of the Soviet Union that the very few people who knew about the secret mission were able to tell their story.